Do you love to ride a bike? Pedal on rivers, lakes or oceans with the Manta5 Hydrofoiler XE-1 e-bike.

Guy Howard-Willis founded Manta5 in 2011, Bring one of his recurring dreams to life – cycling on the water. He teamed up with designer Roland Alonzo, and they optimized and tried the path to a prototype.

Since those beginnings, the company on the North Island of New Zealand has grown to 30 employees. The first consumer-ready model, the XE-1, reached New Zealand consumers in January 2020 and international markets last summer.

Manta5 hydrofoiler XE-1 seems to defy simple categorization. During operation, it looks and feels like riding a bike. But it doesn’t have wheels, so technically it’s not one. It is also used on 70% of the planet where there are simply no paths: rivers, lakes, and oceans.

I had the opportunity to meet with the Manta5 team to take a closer look at this hydrofoil e-bike (and try it out). Read on to read the full review and watch the video below in our editor for an overview.

I went straight to the beach after Louis Wilks, Manta5’s Marketing Director, picked me up at Auckland Airport, an hour’s drive from the company’s headquarters in Hamilton. In the back of the car sat two gleaming white machines and several black carbon fiber sheets.

Each “bicycle” can be disassembled for easy transport, either on a roof rack or on the back of a hatchback or similar with the seats folded down. When I got to the beach, I turned down Wilk’s offer to carry the bike in the sand. I wanted to have the full experience I could have if I was there alone.

I made two trips to take the hydrofoiler parts the short distance to the beach. At first I carried the bike on my shoulder and the longer rear slide in one hand. Next I carried the front foil assembly and the small but heavier battery module. Neither trip was particularly difficult, but easy access to the beach is certainly an advantage.

Once on the beach, assembly turned out to be easy. Each foil is attached to the upturned bike with a couple of screws (tightened with the supplied Manta5 Allen key). And the sealed battery just clicked into its house on the bottom of the bike frame. The entire process took a few minutes and was very straightforward.

The demo bike I rode was well used and made the rounds at media appearances and trade shows around the world for a number of years. Still, it looked almost new.

I initially thought that the whole invention must be pretty fragile. But I gave up on that idea when Rory, the team rider who taught me the basics, simply lifted the front of the bike and pulled it into the water. “You don’t want to hit them,” he said, “but they’re pretty tough.”

The foils are made of reinforced carbon fiber covered with high-performance epoxies, the body made of aircraft aluminum and the internal buoyancy modules made of vacuum-sealed ASA plastic. Hard stuff.

The current model has seven battery assist modes or speeds. At speed 7, simply turning the cranks activates the engine at full power and provides over 450W of assistance. That is enough to erect and wrap the bike (which costs, gives or takes about 350 W depending on the weight of the rider). At speed 1, the engine essentially turns off and you are on your own.

This variability in support offers phenomenal potential for using the XE-1 as a pretty great training tool. For example, driving at level 4 requires approximately 160W of driver input to stay afloat in optimal conditions. In this case, the battery will last for about 3 hours. This is a hell of a workout! 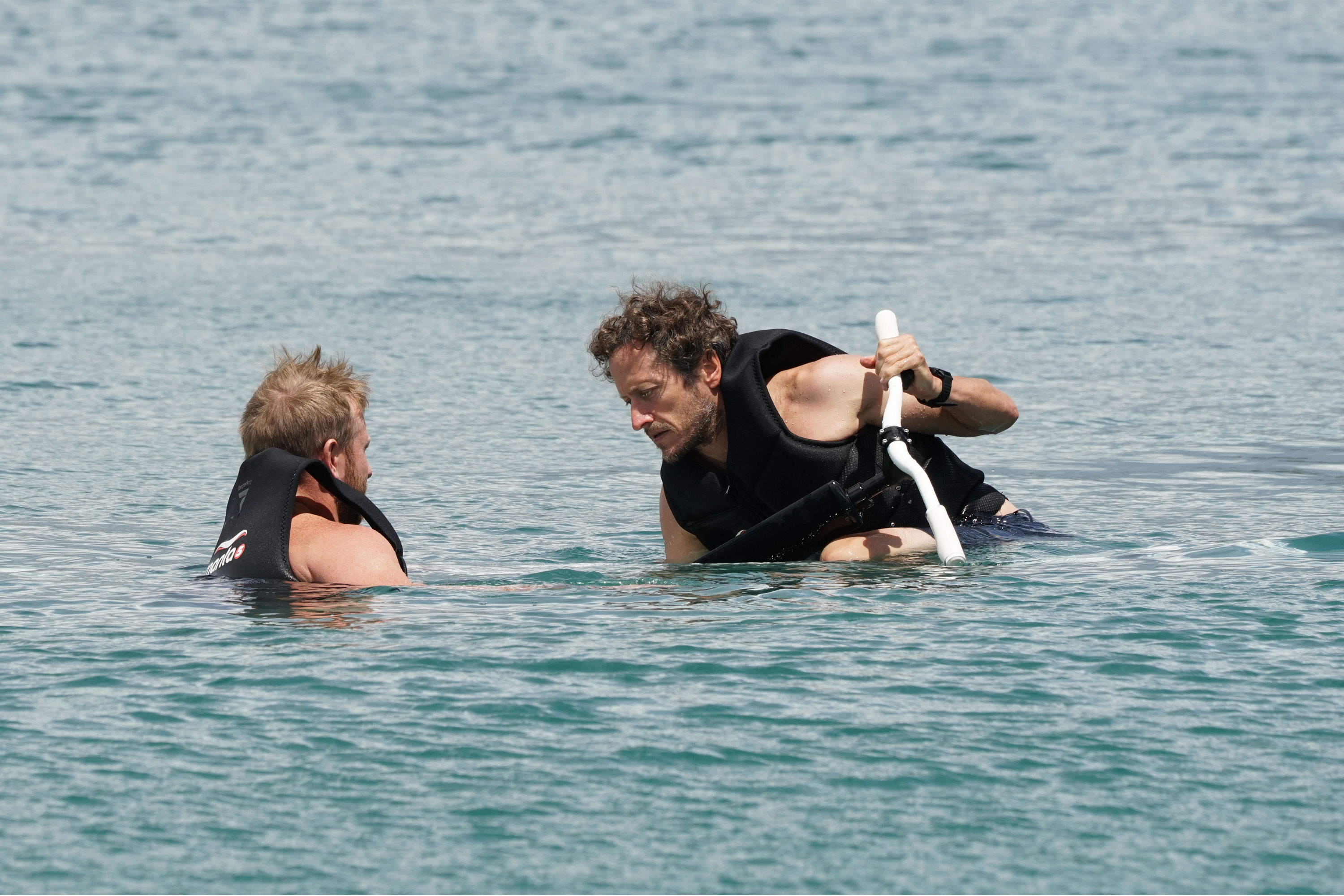 There are three ways to start the hydrofoiler yourself and start foiling. The easiest way to start is from a floating dock, pontoon, or the aft swim platform of a boat. A shallow start is a little more difficult as the bike is half submerged but resting on the ground. Finally and most challenging is the deep water start.

I managed a shallow start on my first try, but I’ve learned that it takes most people five to six tries. Inspired by this experience and full of undeserved confidence, I half expected that they would offer me to sign up as a team rider on site. So I asked Rory if I could jump straight to a deep water start.

This time it took about 35 minutes to get off to a successful start. (It was a good thing they didn’t offer me this contract.) Although the bike floats, it does so on its side. So when you start from deep water, you essentially have to force the bike under you, spin it so you can mount it, balance it perfectly, and then do a timed initiation of pedaling and maintaining control as you step out of the water .

It wasn’t easy, but through trial and error and lots of helpful suggestions from Rory, I was finally able to do it just as I was starting to tremble from my long immersion. 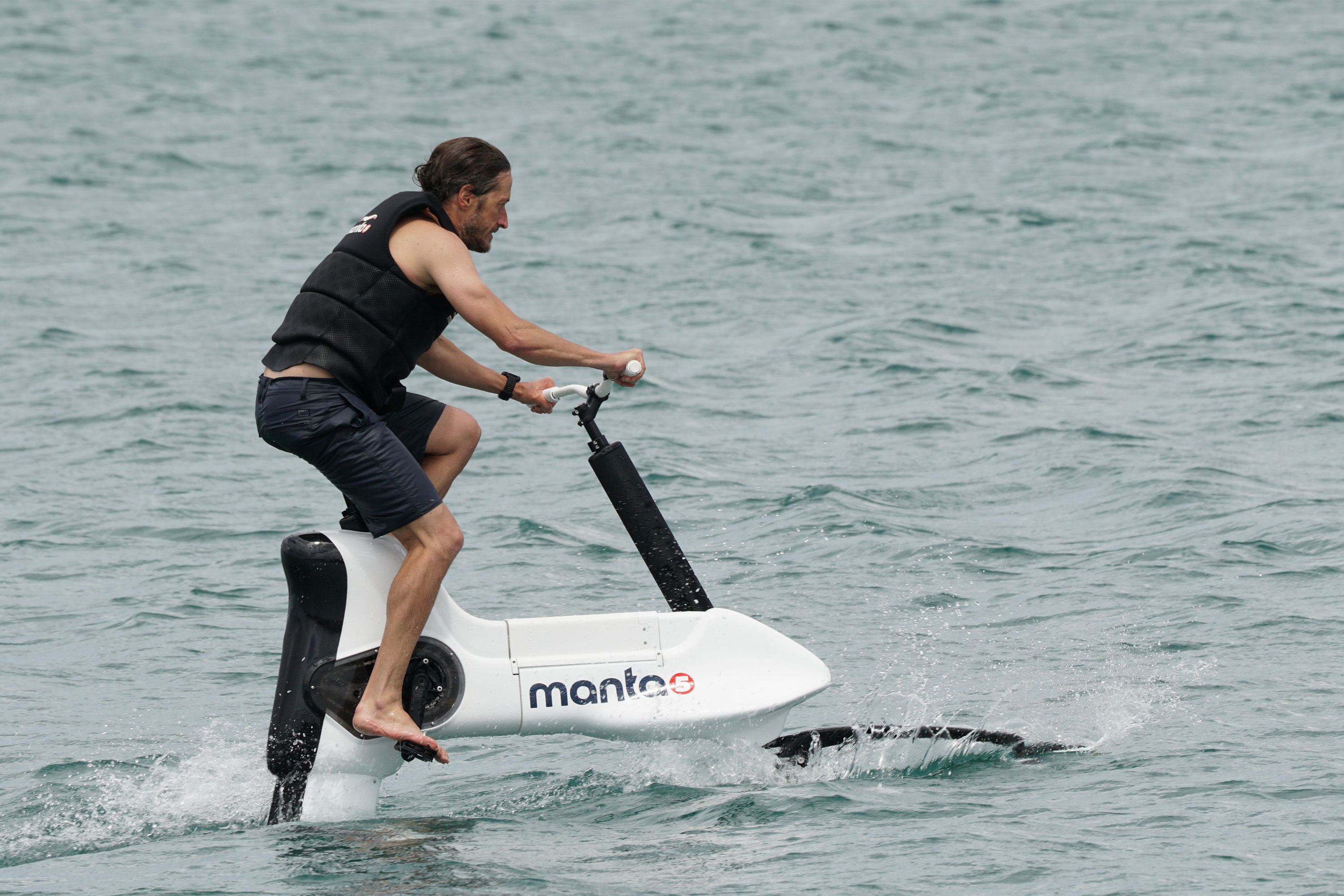 How to drive the Manta5 hydrofoiler XE-1

The actual foiling was pretty amazing. It reminded me a lot of riding a racing bike on the kind of butter asphalt that you crave as a racing cyclist. Even when hacking or swelling, it’s an overall smooth experience as the slides actually support you and stay below the surface of the water. Turning was intuitive and only required a slight tilt combined with a slight twist of the handlebars, which have stops that prevent oversteer.

Leaving the curve was a bit more difficult at first. Until I got the hang of it, I sometimes felt trapped in the turnaround I created and had to throw my weight around to get out. But I’ve improved every time and 30 minutes after riding I was able to get the bike pretty much exactly where I wanted it to be.

My riding experience was in a fairly sheltered bay, although the wind came up towards the end of my ride and gave me a chance to see how well the bike performed in less than glassy circumstances.

After that I asked Rory about the limits of the bike in terms of weather conditions. He thinks the driver’s limitations are more important. The in-house team at Manta5 has ridden the motorbikes upstream and downstream through the breakers of Raglan (a legendary surfing beach) and surfed the waves.

A team driver even drove across the Cook Strait on a single battery charge – a nearly 30 km journey through one of the most dangerous and unpredictable bodies of water in the world. 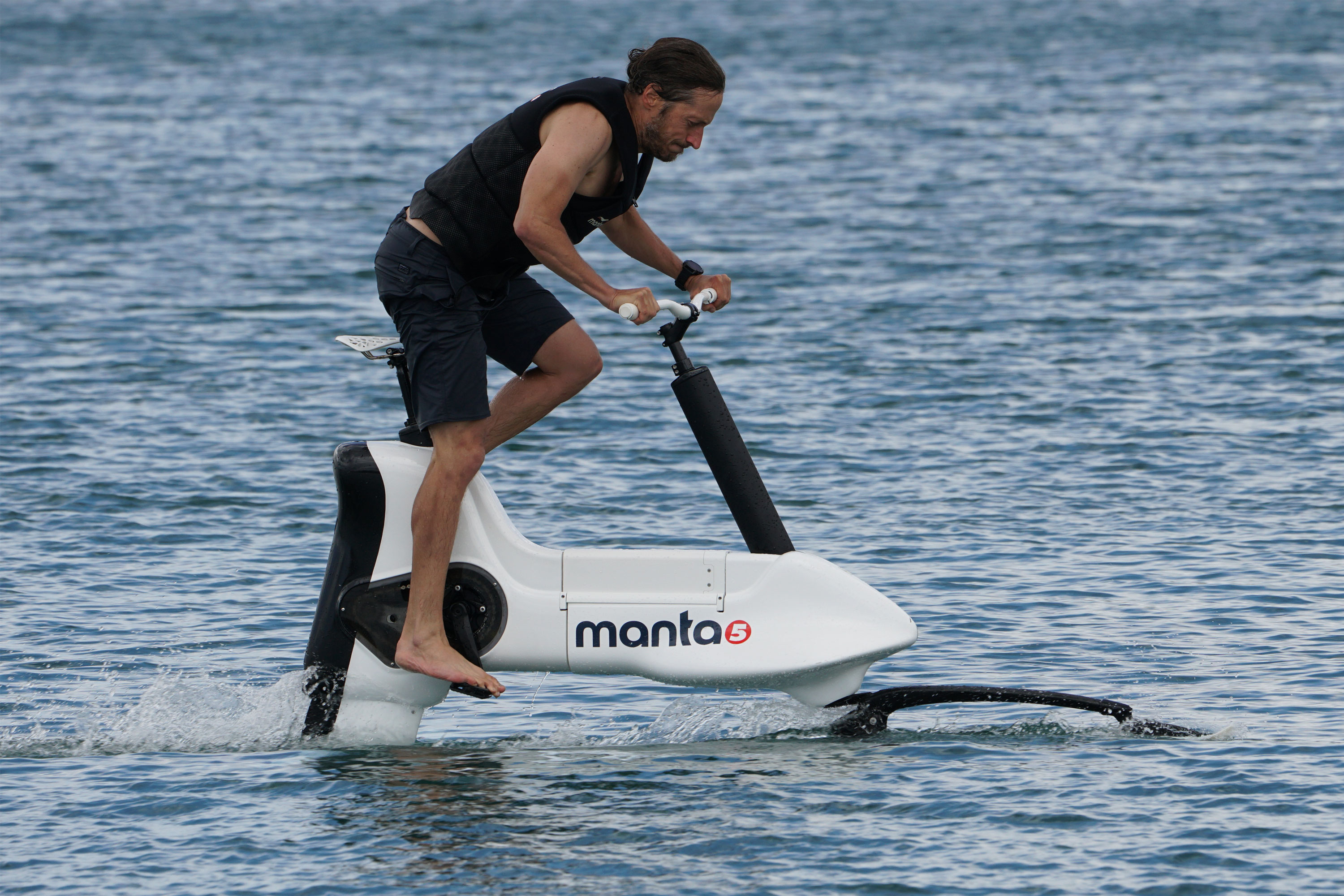 I tested the bike in board shorts and no shoes, but serious riders looking to increase performance want proper cycling shoes. The hard mashing on the included pedals is pretty tough for water-softened feet! Better still, as the cranks accept standard bicycle pedals, you can add clipless pedals if you prefer.

Recreational cyclists who live near coastal or inland waterways should also keep this in mind – even at full power (which should be easy to achieve for almost any fitness level) the bike will run for more than 90 minutes on a single charge. With a cruising speed of around 16 km / h, this offers a range of more than 15 km and enormous opportunities for exploration on the water.

Manta5 shipped the first batch of 300 XE-1s to customers last year, most of which went to the superyacht crowd. (Richard Branson bought two.) Buyers have already claimed most of the next batch of over 900 motorcycles, but the hydrofoils have started moving into other sectors. Over 100 of these second waves have been bought by an Italian team that is rumored to have the lofty goal of developing a new sporting discipline.

The Hydrofoil XE-1 is currently only available by direct order from New Zealand for the tidy sum of $ 8,990. Some may consider this fancy. But it’s not too far from what a new high-end full-suspension enduro bike costs these days. And it’s probably cheaper than what you would pay for a top-of-the-line e-bike for the road or the mountains. When you consider how much new drivable terrain opens up, it almost sounds like a bargain.

Note, however, that the price listed does not include taxes or shipping costs, which the company website estimates at $ 380 to $ 1,000 per bike. The next production run is planned for May 2021. The bikes will be delivered at the end of the month.

Currently, Manta5 has taken orders for 50% of this next batch. So if you’re looking to ride the water this summer, it may be time to break open the piggy bank or downsize your bike quiver.

Check the price at Manta5 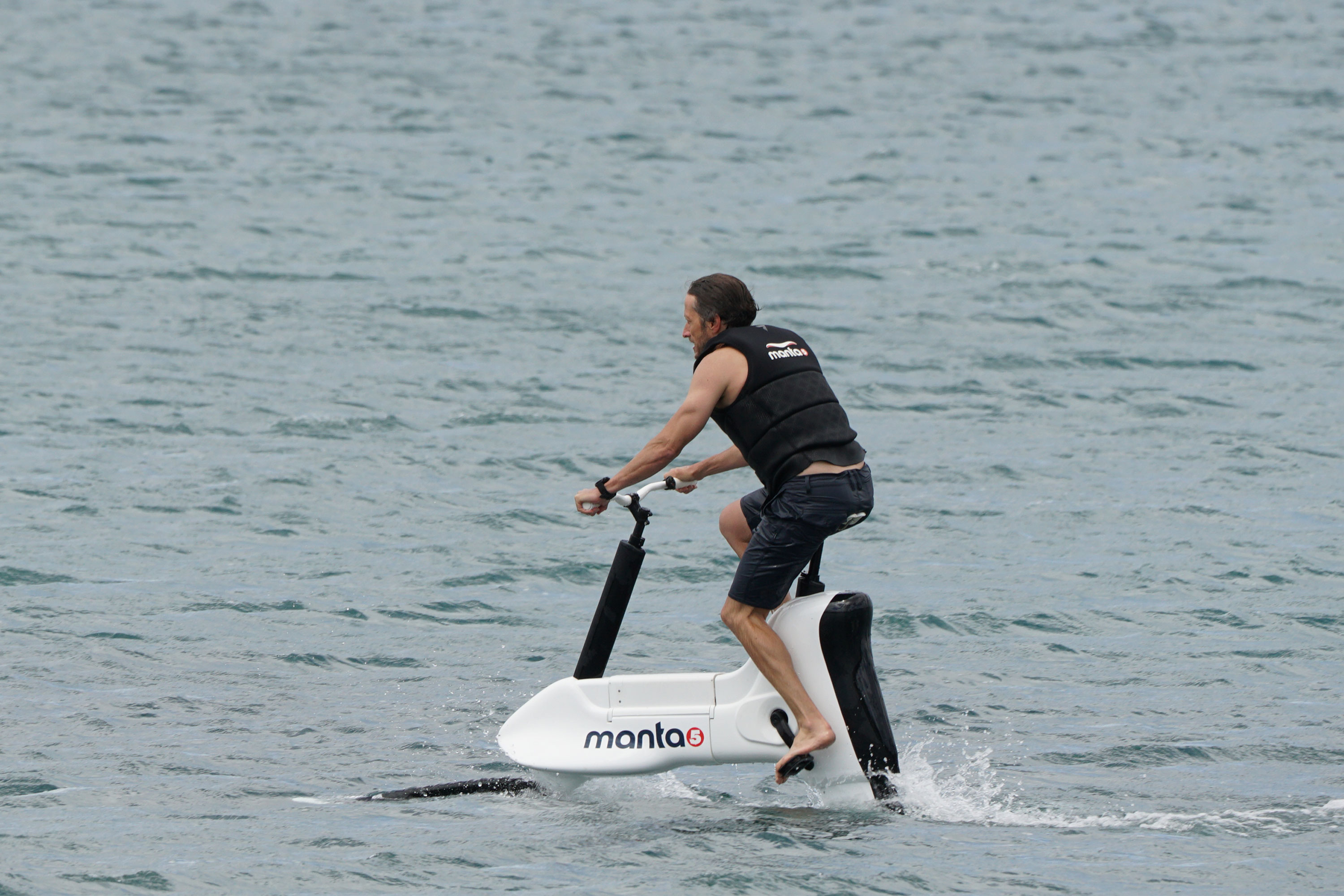