Home »Outdoor» Book Review ‘The Next Everest’: Surviving the Quake, Returning to the Summit

Earthquakes, avalanches, fear – the author Jim Davidson tells it all in his harrowing new book “The Next Everest”. Read an exclusive book review and Q&A with the author here.

Jim Davidson had over 30 years of mountaineering and tour guide experience when he climbed Mt Everest in 2015. Nevertheless, experience is not up to the mountain. Davidson and his team were near the summit when a 7.8 magnitude earthquake shook the plates below. Davidson endured a near death event and widespread panic on that unprecedented day.

And now he’s documented his story. This book is a big deal, not just for the author, but for so many around the world who continue to follow Mt Everest News and Nepal Fight with tourism after the earthquake.

We have a pre-copy of the bookand an exclusive interview with the author to tell you more about the story. There’s even a movie book trailer you can watch If you’re reading an author’s questions and answers, this is not your problem.

Book Review “The Next Everest”

Book summary: On April 25, 2015, Jim Davidson climbed the mountain. Everest when a 7.8 magnitude earthquake set off avalanches all around him and his team that destroyed their only escape route, keeping them at nearly 20,000 feet. It was the largest earthquake in Nepal in 81 years, killing nearly 8,900 people. This day also turned out to be the deadliest in Everest history: 18 people were killed on the mountain.

After Davidson’s team was stranded on Everest for two unsettling days, it was rescued by helicopter. The experience left him shaken. And despite his 33 years as a climber and expedition leader, he wasn’t sure he would ever return. But despite the risk and uncertainty, he returned in 2017 and finally fulfilled his dream of reaching the summit.

Our rating: “The Next Everest” portrays Davidson’s experience of witnessing the greatest disaster ever to climb the mountain and his return to the top of the world’s highest peak. This book does not attempt to exaggerate the danger of the mountain. Everest – you don’t have to. Davidson’s personal account – from his first memory of the world’s tallest mountain (10 years) to his first day on the way to base camp to the first roar of the avalanche – is real and gripping in itself.

Details that Davidson contains – like the thoughts that went through his head when he stepped on a snow bridge or was clamped in a solid line, or the feel of earthquakes of varying magnitude – really make this book shine.

Davidson doesn’t just describe his experiences on the mountain. Everest in 2015, but it also provides the necessary context – context about the Sherpa, historical accounts in years before (and after) the 2015 earthquake that hit the mountain, and much more.

The timeline jumps around pretty often, but luckily, Davidson takes root in every story and becomes the focus, the character that is just to follow. Davidson’s interest in adventure and curiosity, an urgency as will happen on the next page, also helps as you read through this 400-page volume. (We read our copy in a week.)

Why read: If you’re looking for an engaging, firsthand account of mountain adventures. Everest.

“We climbed the deadliest section of Everest at night. The jumbled icefall we struggled through rose more than two thousand vertical feet in a mile as we ascended from Base Camp to Camp One. …

The darkness made it harder for us to navigate the moving ice maze. But the deep night cold slowed the movement of the Khumbu Glacier, reducing the likelihood of frozen walls collapsing on us or avalanches burying us. At least we hoped so.

I tried to hurry through the Khumbu Icefall but could only rumble uphill like a tired old yak. Whenever I stopped, my aching hamstrings got stronger, but after just a few more steps my pace slowed down again. Even though I was in the best climbing form of my life, my deoxygenated legs couldn’t move faster in the sparse air at nineteen thousand feet.

It was my first day on Mount Everest, and the chaotic landscape and self-doubt made me feel insecure. A few more hours before we reached Camp One, we went deeper into the icefall.

Light from our headlights bounced off the shiny walls of ice. Dancing shadows sometimes made the glacier blocks look like they were moving. About half of the other fifteen climbers and fifteen Nepalese guides known as Sherpas on our team climbed into the tangled icefall above us. the rest followed.

A leader moved with each team member. Most of the climbing Sherpas we rented were from Sherpa, but some were from other ethnic groups such as Bhote. * Including our two high-ranking American guides, 32 of us climbed the Dark Icefall with people from other teams. Every few minutes the nervous sweep of a spotlight marked the way into the future. “

What was the hardest part in climbing the mountain? Everest?

There are two difficult parts: prepare and endure. Preparing for Everest shouldn’t just be a rush program to get the minimum skills and run in the Himalayas.

Preparing for Everest should include many years of refining the numerous skills required and developing robust physical and mental fitness. As I pointed out in “The Next Everest,” you must understand both the mountains and yourself very well if you are to be safe and successful at high altitudes.

Staying healthy, positive, and engaged during long expeditions can be difficult. From Colorado to the summit of Everest and back home again [in 2017] It took me 66 days. If you spend days or weeks at high altitude in a cold tent in inclement weather, you must have the strength to endure and the resilience to recover.

Nirmal Purja is almost halfway through climbing all 8,000 meter peaks in one year. If successful, it will be one of the greatest accomplishments in mountaineering history, breaking the current record for climbing all 8,000-meter peaks by more than 6 years. Continue reading…

What was the hardest part of telling your story in this book?

I wanted the reader to feel like they were in the tent with me, at 19,700 feet, when the earthquake struck the Khumbu Glacier below us. I needed her to hear the two massive avalanches that rushed at us thousands of meters in altitude like runaway trains. To bring these sensations to life on the page, I had to relive some horrific moments.

I also had to reveal the sadness in base camp afterwards [learning] Eighteen people died trying to capture a nation’s grief. I tried hard to produce these sad passages. However, when we look at our losses and muster the strength to move forward, we are stronger and more resilient for the next challenge – the next Everest.

After surviving the 2015 earthquakes and avalanches, I wasn’t interested in going back. As a geologist, I studied the seismological reports and was shocked to discover that not only was another quake possible, but also inevitable. And it [would be] a great tremor from the uncovered seismic movement deficit that had formed beneath Nepal.

But the Nepalese people were in dire need of tourism and mountaineering to stay afloat as they rebuilt the country. And I still wanted to try to climb the mountain. Everest. After thinking about all this mixed data for a long time, I decided to go back in 2016. I was nervous of course, but excited to try again.

Tell us about your mountaineering background. 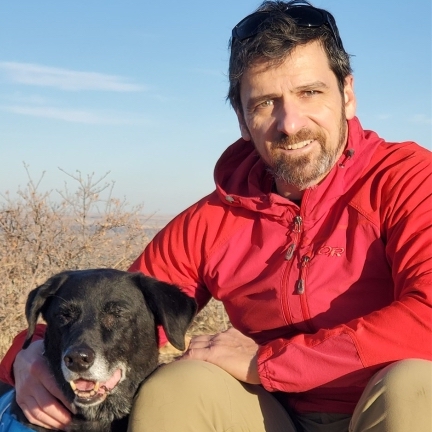 Jim Davidson with his dog

My eyes [were] When I started backpacking the Appalachian Trail in 1981, I opened up to the mountains. While enjoying the gentle peaks of New England, I knew I needed bigger mountains. So I went west in 1982 and learned rock climbing and ice climbing while working on my bachelor’s degree in geology in Bozeman, Montana.

As my soil and groundwater remediation career grew, I spent about 16 years honing my mountaineering skills in the Rockies and the Pacific Northwest (Mt. Rainier etc) before climbing expedition climbing in 1998 and about two dozen peaks in the Reached 16,000 – up to 22,000 feet of range.

You have also worked on rescue missions several times, right?

Yes, although I have never joined a formal search and rescue team. I was always trained in first aid and avalanche awareness to be as safe as possible. During my 39-year wilderness trip, I was a first responder on around 10 major incidents (as well as many minor situations).

The hardest part was treating severe injuries over a long period of time (18 hours high up on Longs Peak) or in an extreme situation. In The Next Everest, I demonstrated what those experiences look like by describing a makeshift rescue that I volunteered for at 19,200 feet on Denali.

What was your first mountaineering expedition?

My first notable peak was a winter climb up the mountain. Washington (6,288 feet) in New Hampshire. Although of modest height, it has fierce winds and severe winter conditions so it was a good start workout.

My first 14,000 foot summit was Longs Peak via a technical route in 1985. My favorite climbs are remote routes on high, icy peaks in Rocky Mountain National Park.

How long did it take you to write this book?

It took me two concentrated years to write “The Next Everest”. In addition to my family and climbing, I had my speaking career, so me [was] strictly to save time writing each week. The editing and revision took another 6 months. However, it was worth the effort.

This interview has been edited for readability and clarity.

Check out these five books that will make great outdoor readings possible in 2020. Read more…