Bivy Stick hit the market in 2018 with a satellite device that connects to your phone. Now, the brand’s got an even better version ready for the backcountry.

A big reason why we are drawn to the backcountry is a sense of freedom. Wide-open plains and canyons, fresh mountain air, and bigger outdoor spaces. But sometimes, being off-grid for weeks or months isn’t safe — or feasible. Enter satellite devices: both a comfort and a life-saving necessity.

This week, Bivy Stick launches its new satellite communicator: the Bivy Stick Blue. We took a look at all the new features and improvements made in version 2 and, most importantly, tested it off-grid.

In short: The Bivy Stick Blue ($350) is one of the smallest and lightest on the market (weighing 3.3 ounces). It comes packed with features to help you navigate and communicate off-grid, and it has even better integration with the brand’s app than ever before.

What You Need to Know

If you spend time in the backcountry outside of cell service, a satellite communication device is pretty necessary. You can send a quick message letting your loved ones know that you arrived at your destination. In the case of bad weather or an accident, you can have SAR help dispatched immediately.

Bivy Stick spent a lot of time making some really important changes to get from the first version (useful but clunky) to this one. The brand put a premium on two things: the device’s integration with the app and its smaller construction, which is immediately evident by looking at both versions side by side.

It’s even lighter than the diminutive 3.5-ounce Garmin inReach Mini. But the real value of Bivy (besides being a safety device that can facilitate rescue) lies in its awesome app interface. We tested the prototype along with the app in the field late last year and early this spring.

The Bivy Stick is great for both weekend warriors and hardcore adventurers. And the database of documented routes with trail info and reviews makes it accessible for beginners, too.

The best feature of the Bivy Stick is that there is no activation fee and no annual contracts. The device works on credits. Doing a one-time trip down to Canyonlands for two weeks? You can turn it on, get access for 30 days, and then put it away for the rest of the year.

Personally, the feature I was most impressed with on the device was its accessibility — both the actual device and the app. The interface doesn’t take long to learn how to use, and being able to send your GPS location and a text in a single message (meaning you are using fewer credits) is very cool.

First, download the Bivy Stick app. This gives you the ability to connect the device to your phone to send messages, access your contacts directly from the app (so you don’t have to type in digits) and, best of all, let you access area maps, tracking, and more.

Price Comparison: The price for the Bivy Stick is comparable to both the Garmin inReach Mini and Somewear Hotspot. You do have to pay for a Bivy messaging plan ($18 minimum), which provides roughly the same number of messages and features as several competitors. However, when compared directly, the Bivy is cheaper because there are no activation fees or annual contracts.

While the SPOT X carries a cheaper purchase price, when you add in contracts and activation fees, the Bivy can save money over the long term.

A huge perk to using the Bivy over messaging satellite devices like the SPOT or Garmin inReach is that you actually get to type everything on your phone. With other devices, there’s a tiny, condensed keyboard and a learning curve to familiarize yourself with the settings. With the app-based Bivy, everything you need is already in the palm of your hand.

Testing this in a narrow canyon in Utah, it took about 2.5 minutes to send a message, watch the status lights to confirm that it was sent, and get a confirmation from my recipient that the message was received.

The status lights that tell you if and when a message is sent is a valuable feature — especially if it’s an emergency — that I hadn’t considered before.

I only had one qualm with this device, which is pretty impressive given the number of updates the brand made. As with any satellite device on the global network, the Bivy Stick has to be visible from the sky to work. This means if you are, say, deep in a canyon, it will take a couple of minutes for your message to go up and out.

According to the company (and confirmed in our testing), the device can work through thinner fabrics, like pack brains. (Bivy Stick also provides a mount and accessory cord.)

Because it’s app-based, I was concerned with accidentally hitting the SOS while my phone was in my pack or pocket. This happened to me once on a trail run up in the mountains — my phone dialed 911 twice. Not good.

Luckily, Bivy Stick built in a fail-safe. To activate the SOS, you must choose the SOS option in the app’s menu, click “yes” that you intend to use the function, and then type the letters S-O-S. It adds a few seconds to the process of calling for help, but it also ensures that you won’t be contacting search and rescue unintentionally. 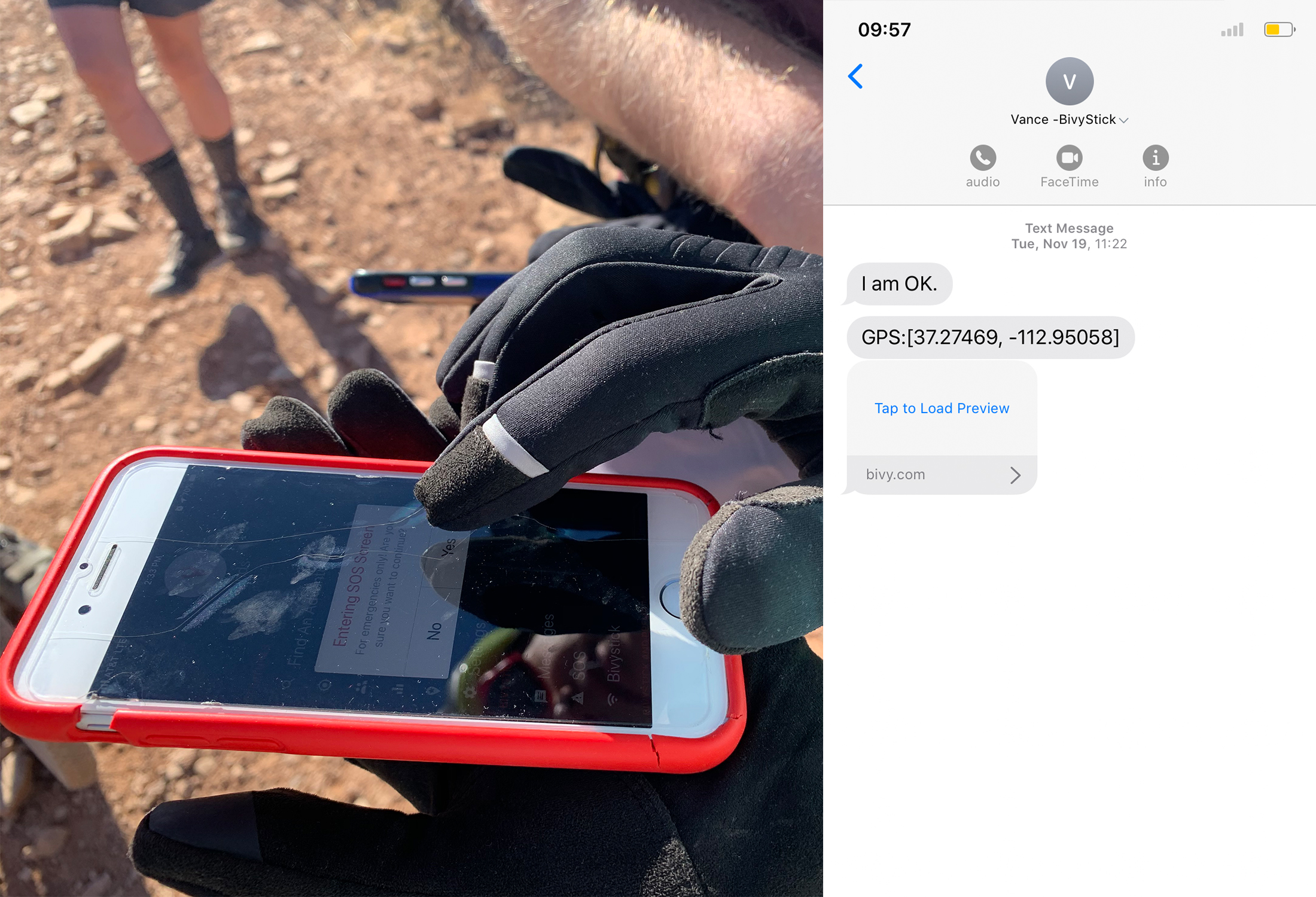 Final Thoughts on the New Bivy

Upon testing the new Bivy Stick Blue in the field, we really enjoyed the app and maps and were impressed with its tracking features. We also found it pretty durable, although the buttons were a bit stiff. (Note: This was an issue with the prototype, and something the company fixed for the new devices coming to market.)

All the functions of the app that we tested (choosing a route, using maps, sending a text, and navigating SOS) worked, and worked with ease.

Given the price and abundance of features, the Bivy Stick is a great tool to have in your pack. We know we’re looking forward to testing out the Bivy 2.0 on a variety of adventures in the future.