The Stryde Studio spin bike has a small footprint, fantastic classes, and an even better price tag.

I’ll preface this review by saying that while I’ve been riding bikes my whole life, I only took my first studio spin class last year. And as strange as I thought the concept was — combining the pulsing beats of a club with a sweaty gym ambiance — I really enjoyed it.

And after riding on this studio bike I realized why: spinning helped me break out and diversify my regular workout routine. The classes aren’t a workout for the faint of heart — they’ll make you sweat and smell, and they’ll have you pushing your body to its limits, all in a footprint of 10 square feet or less.

Before COVID-19, I think most people enjoyed studio spin classes because of the camaraderie and social vibe. While I don’t rely on a group of other people to keep me moving and motivated, I do appreciate the community feel and added challenge. (Like a traditional spin class, the Stryde tracks your performance against others in a leaderboard. But you can also hide this screen if you’d like to focus on your own ride.)

In short: The Stryde bike is a lot more wallet-friendly than other in-home smart studio bikes and offers a smashing array of classes for the price. And while it’s compact, it still provides comfortable movement for riders of all heights and sizes.

Two of our editors took the Stryde for a spin (pun intended). The bike had lots of pros (and a few cons, see below). But overall, we really liked its class offerings, compact design, and comfort in the saddle.

The basics: The seat and handlebar heights were easy to adjust, and the pedals have toe cages and are SPD-compatible. The bike also has racks for weights in the back and two up front for water bottles or towels.

Compared to other in-home spin bikes, Stryde partners with multiple cycle studios to provide an impressive spread of classes that are updated monthly. There are more standard themes like “rhythm” and “house” rides, but there are also more niche classes, like an ’80s music ride, a rap ride, and a sculpt (with weights) ride.

Instead of having one studio — like my local High Ride Cycle in Denver — with Stryde, I have access to classes and instructors from studios across the country. And it’s all from the comfort of my home, garage, or office. (Because of COVID-19, it’s no wonder bike sales are up anywhere from 30% to 300% this year.)

We tried a variety of classes from High Ride Cycle, City Cycle (based in Seattle), and RedBike (based in Miami). Each spin class incorporated some sort of warmup, sprint, and cooldown or stretching period. Most of the classes the Stryde bike offers last 30-45 minutes.

During my workouts, I most enjoyed focusing on my cadence metrics. This is because many of the classes are set to music, and while you can choose how hard to push yourself during a sprint or climb, it’s more helpful if you can sync up your cadence to the beat of the music.

The studio instructors also call out reminders for what range of rpms you should aim for, how many beats to count when you’re pushing out of the saddle, and when you should add resistance.

The classes were high-quality and felt similar to what you’d get in person. I found my cadence during a class would range anywhere from 50 to 100 rpms. And while cycling in place in an un-airconditioned gear garage in 90-degree heat isn’t nearly the same ambiance as riding outside, it is a great way to get a workout in.

After your workout, you can also view your average and total metrics for the ride. If you don’t have a membership, you can also ride the bike in manual mode by choosing Stryde’s “Free Ride” tab (and you still get the metrics display while riding).

What Could Have Been Better

The only issue I consistently had with the Stryde bike was the screen tilt. Obviously, once you adjust the seat to your height, you’ll want to adjust the screen too. Every time I tilted it (especially when I was up out of the saddle, which happens often with the Stryde), it would eventually slide or rotate down to its original position. I struggled to figure out how I could tighten the screen into my preferred angle. 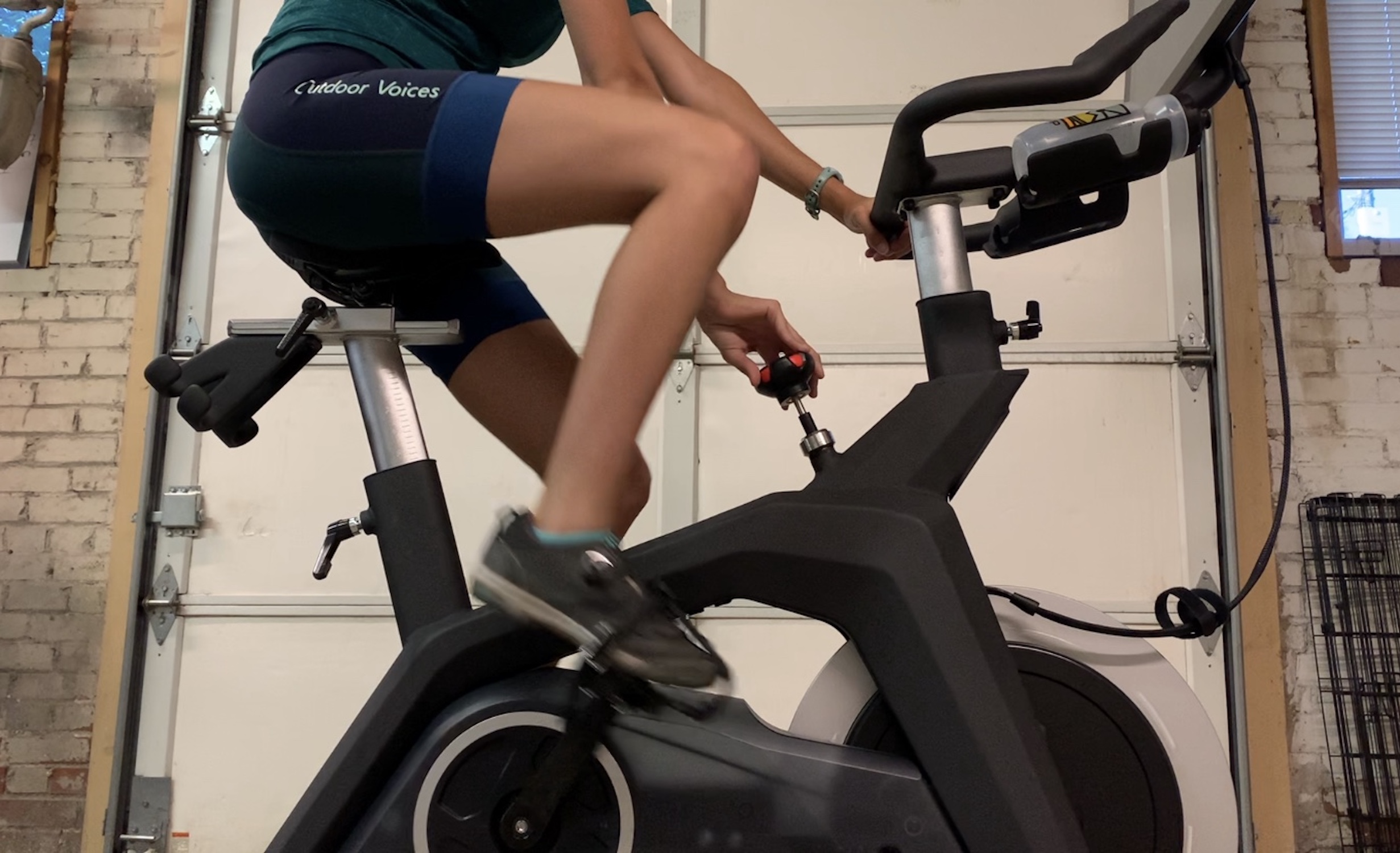 I will note, even when the screen wasn’t at the right angle, I didn’t have any issues with glare.

The resistance: On a few occasions, I noticed the machine (or screen) wasn’t reporting my resistance, even when I gave the knob a hearty five to six turns.

This only happened a few times in one specific session on the bike. Because all the other metrics were displaying accurately, this had me believing it was more of a computer glitch than an issue with the knob or bike wiring itself.

Our recommendation for any bike issues you have is to read the manual or reach out to Stryde’s customer service team. They were happy to troubleshoot with us through our testing process.

Meeting a sudden and unexpected spike in indoor cycling amidst the COVID-19 crisis, Nike launches the SuperRep Cycle, a shoe specifically designed to accommodate the demands of a stationary bike workout. Read more…

On the surface, the Stryde bike may seem like a tossup between other major interactive fitness bikes like Peloton and NordicTrack. But while we had a couple minor issues with the hardware, the Stryde really outcompetes its rivals on price.

Unlike Peloton and NordicTrack, Stryde Bike offers an array of classes from different studios rather than a single cache of in-house classes from one brand. It also comes in about $10 per month cheaper than the competition and costs several hundred dollars less than the industry-leading Peloton (it’s roughly the same price as some NordicTrack options).

So if you want to get in a good sweat from the comfort and safety of your own home, the Stryde should definitely be in your search for interactive exercise bikes, especially if price and class variety are key factors for you.