The EarthCruiser Terranova overland camper perfectly suits North American travel, with systems that users have fully tested around the globe.

Pick out your favorite 2020 one-ton American pickup, write a check for $275,000 or more, and drop them both off at EarthCruiser. A few months later, you’ll have a seriously capable and comfortable home on wheels.

Terranova fills the void in the overland camper/RV market between the pricey and huge EarthRoamer and more traditional full-featured truck campers like Four Wheel Campers. This is a space that’s getting more attention lately, with EarthCruiser’s EXD camper and vehicle camper systems like those from Nimbl Vehicles.

EarthCruiser started its Bend, Oregon, operations in 2009 just offering the EXP FUSO-based pop-up overland camper. Since then, it has built up a portfolio of adventure camper offerings, which are now created by a team of 25.

In the past year, EarthCruiser has been hard at work bringing to market its V8 FUSO-based Dual Cab FX and EXP campers. It even recently started offering its proprietary FUSO 4×4 conversion without a camper system on the vehicle as part of a new CORE Vehicles commercial division.

The EarthCruiser Terranova will be the lastest overland camper to roll out of the Bend factory. It’s a perfect melding of the high-end, world-capable features found on the EarthCruiser FUSO-based campers and the smaller, more nimble EarthCruiser domestic pickup-based truck campers. 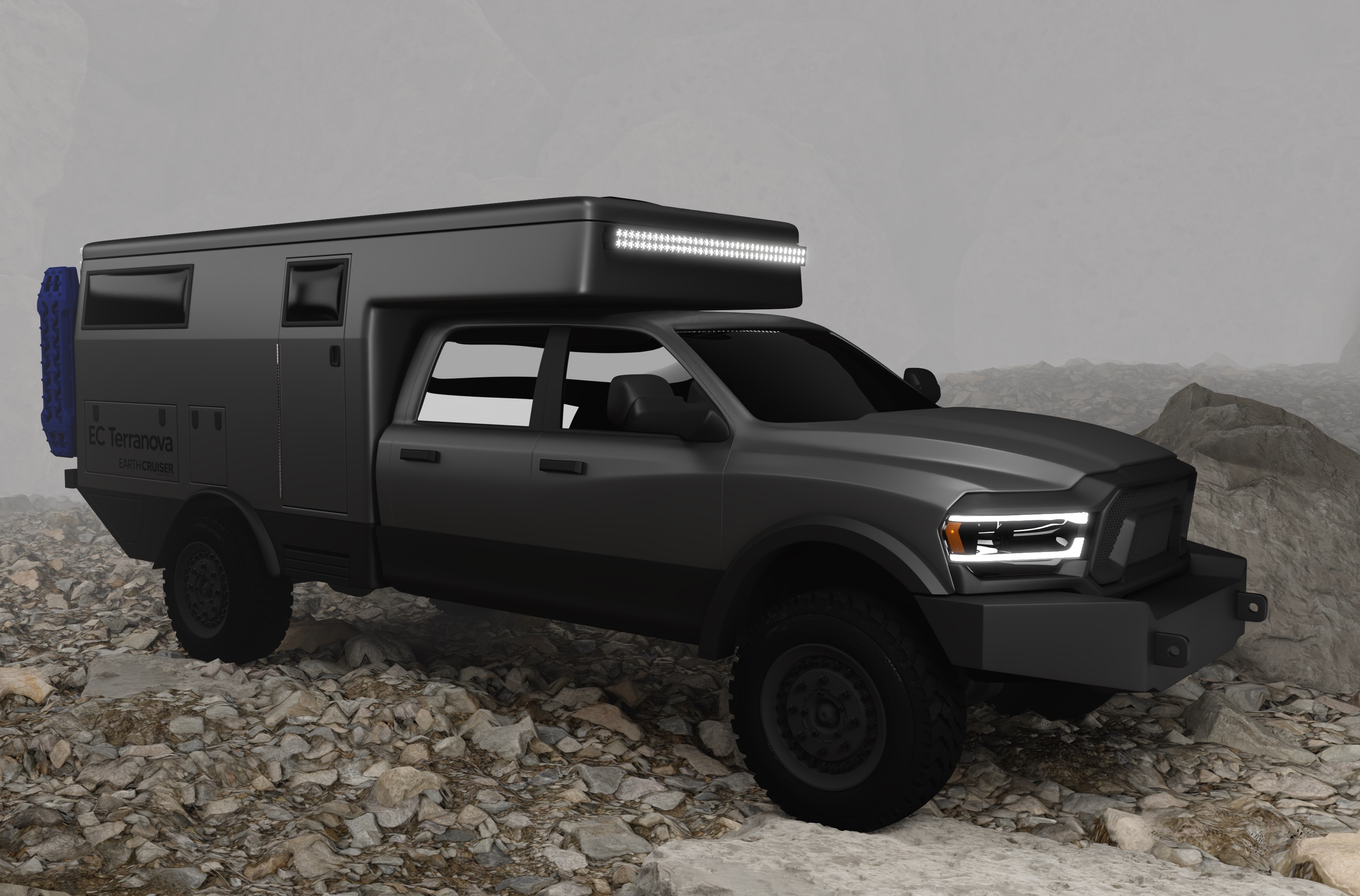 With a prototype rolling out of the factory before the end of the year and production units soon after in early 2021, EarthCruiser is moving full steam ahead on this impressive camper. We have full faith they’ll hit that ambitious timeline. That’s in part because the Terranova is not all that dissimilar to the rest of its top-of-the-line campers.

The big thing that sets the Terranova apart is the cab-over bed. EarthCruiser has dabbled in cab-over designs in its smaller slide-in truck campers. It has never brought this design element to the more full-featured and chassis-integrated camper projects, however.

The whole idea with this truck camper is to offer comfort, agility, ease of maintenance, and parts availability of a one-ton pickup chassis with the extreme durability, comfort, and ergonomic design that buyers expect from EarthCruiser campers.

Attach the foam-core composite camper to your choice of 2020-plus Ford F350, RAM 3500, or Silverado 3500 with EarthCruiser’s tried-and-true kinetic mount system. This system not only securely fastens the camper to the truck but also allows the truck frame to appropriately flex under the camper when tackling off-road terrain.

“The EC Terranova Expedition Camper meets customer demand for a cab-over with a choice of domestic chassis. We know many customers feel more comfortable behind the wheel of a consumer-class truck versus commercial and have strong brand preferences. We want to be able to honor that,” said Chad Knight, GM of EarthCruiser. 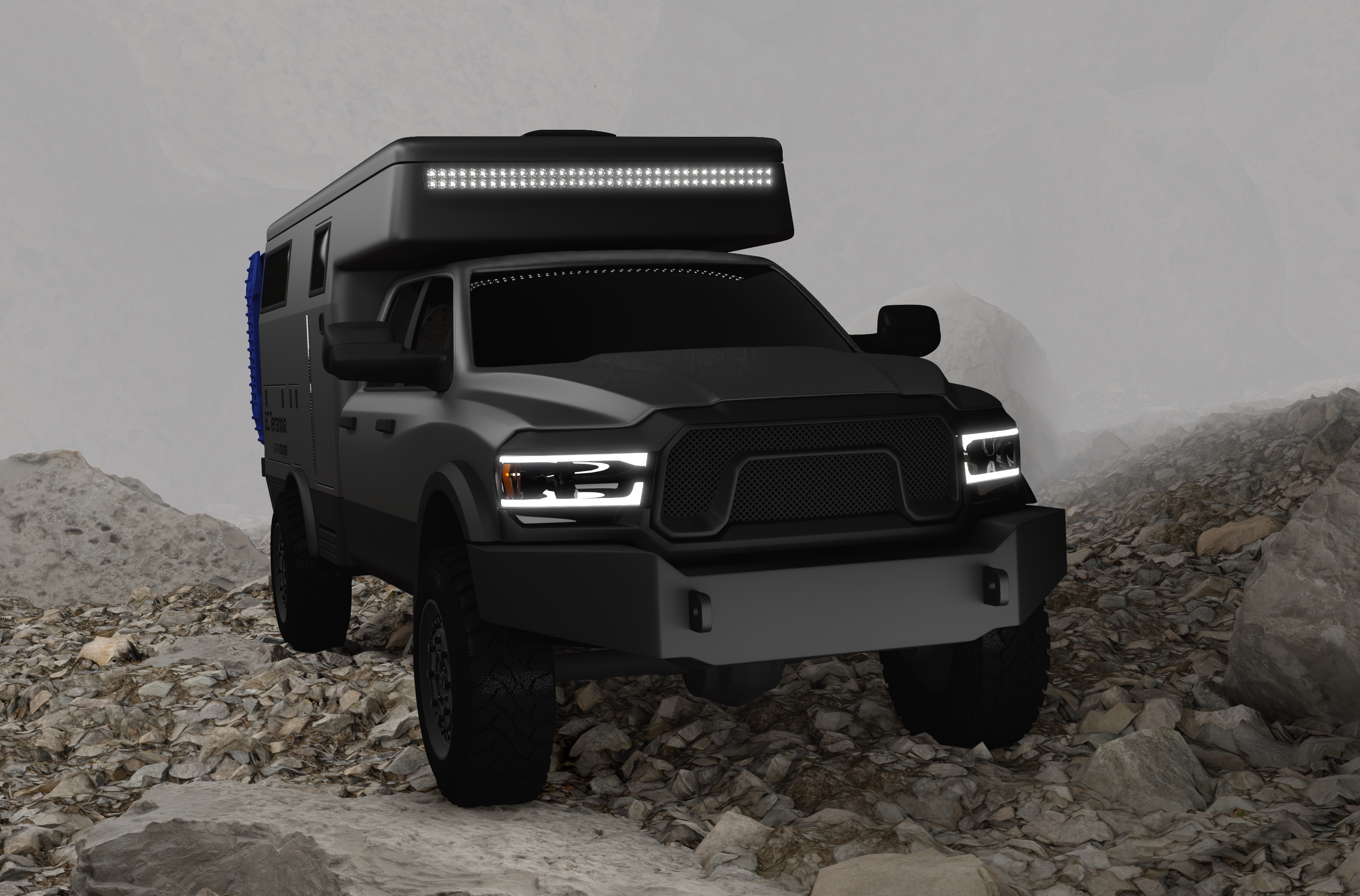 Because the Terranova has a cab-over bed and a dinette that turns into a bed, it can comfortably sleep four when the roof is raised. Speaking of raising the roof, the same pop-top design EarthCruiser has already been perfected over more than a decade on the EXP.

A key feature of this pop-top design is that it raises and lowers with just the touch of a button — no removing locks or popping latches required. The pop-up tent material is made of three layers for insulation and includes eight windows for an immersive panoramic view. The windows include insect screens, privacy screens, and a clear vinyl layer for the ultimate in all-season versatility.

The smooth, contoured shape of the camper not only looks more appealing than some of the box truck-looking overland campers out there but is also more aerodynamic. On the outside of this camper, you get a whole host of great features. Think shower, purified drinking water faucet, big storage compartments, and more.

Inside, you get everything including the kitchen sink. A full bathroom, kitchen with induction cooktop and fridge/freezer, and more come standard. There are tons of storage areas throughout the camper that ensure all your gear is secure and stowed. This is especially important when bouncing down a rough trail.

Of course, in today’s digitized and electrified world, the Terranova is fully powered up. A 108W roof-mounted solar panel feeds a 400Ah lithium house battery. A central digital command panel monitors and allows you to control all camper electronics on board. Of course, there are plenty of 12V outlets, in a variety of styles, to charge up all your portable electronics. 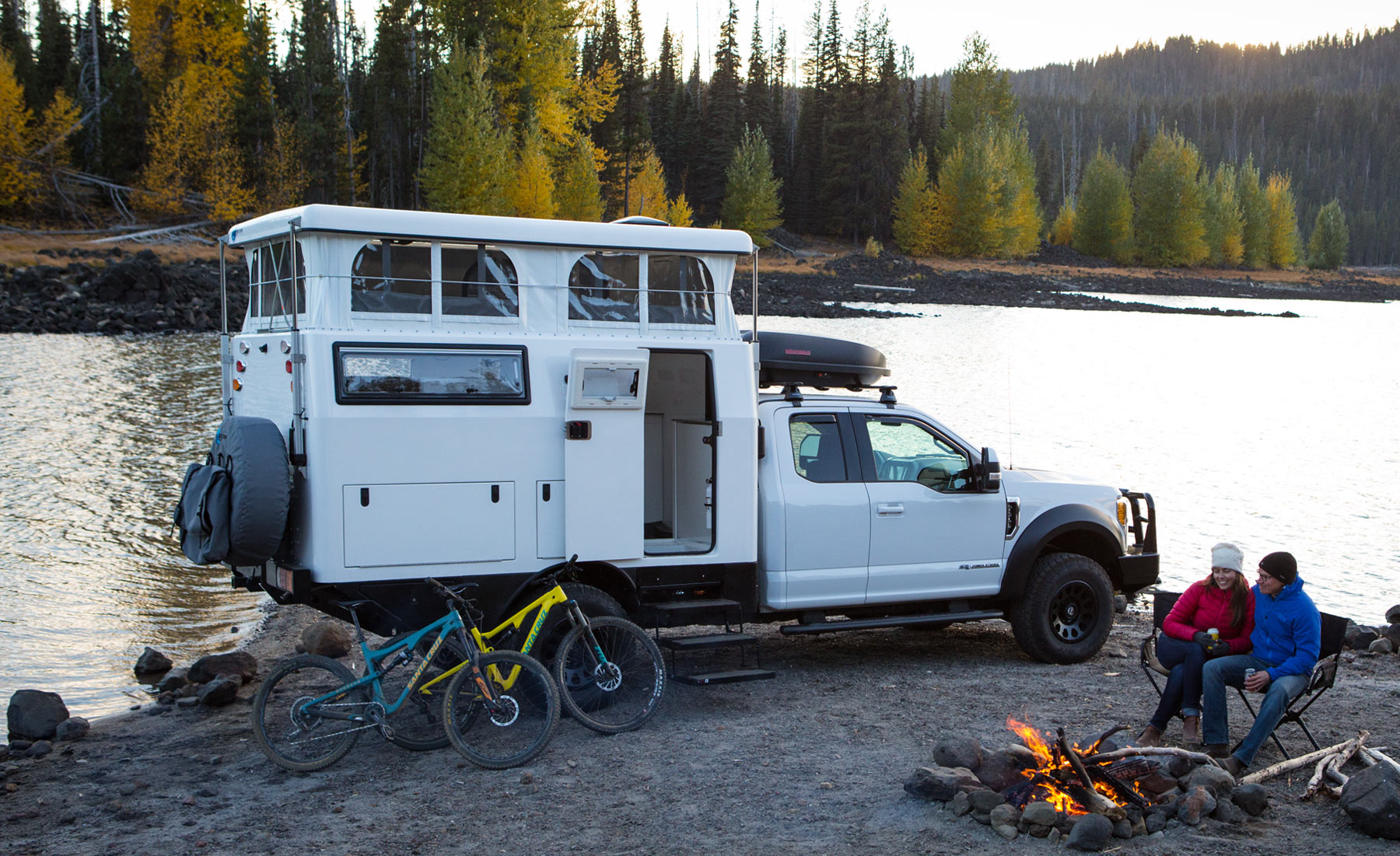 Just about 2 years ago, EarthCruiser offered the EXD. Think of the EarthCruiser EXD as the non-cab-over Terranova. I’ve personally spent some time crawling around the EXD. I can assure you the brand constructed it well, thought out the details, and packed it with top-quality components.

The EXD requires a 2017 or newer one-ton pickup chassis and about $220,000 to $265,000 of your hard-earned greenbacks. It’s a serious adventure machine. We think it’s a great option if you don’t need the extra cab-over sleeping area of the Terranova. The EXD sleeps two in the dinette/bed combo area at the back.

Buy Into Life on the Road

EarthCruiser has been a global leader in the overland vehicle space. But the new Terranova Camper is sure to appeal to an even wider audience.

To learn more about this new camper and the rest of the EarthCruiser family of campers, check out EarthCruiser.com. The Terranova is available now for preorder. We expect production vehicles to hit the road in early 2021.