After a three-year review process, the Trump administration all but killed a proposed copper-molybdenum-gold mine near Alaska’s famous watershed in Bristol Bay.

Today the Army Corps of Engineers (USACE) made the rejection public the environmental statement of the Pebble Limited Partnership.

Still, indigenous Alaskans, conservation groups, non-partisan political leaders and individuals find grounds to celebrate in the latest decision, which, if confirmed, will protect one of the largest and most productive salmon fisheries in the world.

Proponents of the mine, however, see a missed opportunity for capital gains in an area that is rich in mineral deposits.

“It is not just shortsighted for the United States to turn its back on an opportunity to develop these minerals here at home in a way that US regulators have agreed to be environmentally sound and responsible, for purely political reasons Starting up is self-destructive, ”said Ron Thiessen, President and CEO of Northern Dynasty.

The USACE, however, claims that it refrains from making political decisions and instead makes its decisions based on sound scientific evidence.

According to its public statement, USACE found that the applicant’s plan for the discharge of filler material did not comply with the guidelines of the Clean Water Act and concluded that the proposed project would be contrary to the public interest.

The agency found that a 20-year-old mine would seriously affect the ecosystem. Indeed, there were executives pushing for the mine to be approved heard on secret recordings According to the statement, the mine had the potential to be mined for 180 years – well in excess of the 20-year maximum that the Northern Dynasty promised on its permit application.

A king salmon caught in an Alaskan stream

“Today we celebrate the appropriate action by USACE to finally acknowledge this underlying truth: Pebble’s proposal is too toxic to our region and cannot be built without destroying the environment that sustains our cultures and communities,” said Robert Heyano, CEO of das United tribes of Bristol Bay. The UTBB represents the Yup’ik, Dena’ina and Alutiiq tribes in the region.

“Hunters, anglers, commercial fishermen and communities across Alaska agree that the consequences of developing the Pebble Mine would be ruinous,” said John Gale, conservation director for Backcountry hunters & anglers. “The Army Corps of Engineers’ rejection of the Pebble Mine permit application puts science before politics and is a critical affirmation from the government that this is simply an irresponsible worst-place mine.” 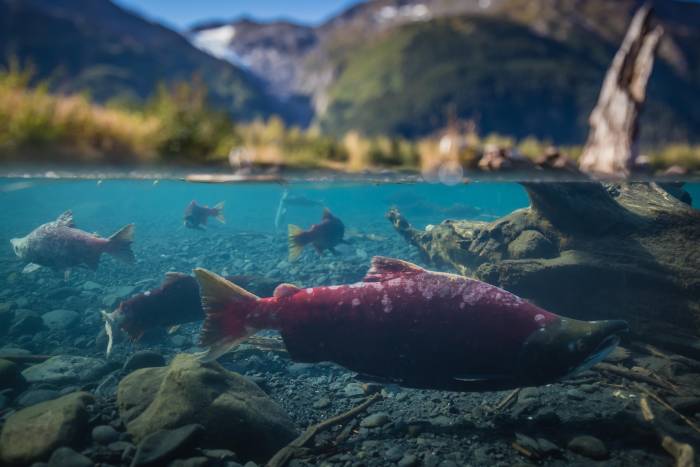 An Alaskan sockeye salmon in its spawning colors

For those who see cause to celebrate today, many groups have called for permanent protection of this vital and dynamic watershed, including Trout Unlimited, Backcountry Hunters & Anglers, the Theodore Roosevelt Conservation Partnership, and the National Resources Defense Council.

“Our work isn’t done yet,” said Heyano. “We will continue to work to protect Bristol Bay over the long term until we are sure our pristine land and water remain intact for our children’s children and all future generations. A big “Quyana” for everyone who worked to stop this toxic project and for those who will continue to fight for Bristol Bay. “