What is one crucial piece of gear for adventure travel? Is a dream job overrated? How does the outdoor industry include more people of color? To get the answers to all this and more, we reached out to ‘Epic Trails’ and BackpackingTV host Eric Hanson.

“Epic Trails” presents an emotional and thought-provoking TV series that follows host Eric Hanson around the world as he explores the people, places, and adventures that make each landscape unique. The show has been seen in 134 countries and is available to more than 100 million TV households in the U.S.

And Hanson’s BackpackingTV YouTube channel, designed to make the whole of backpacking more digestible to beginners and seasoned veterans alike, has more than 38,000 subscribers.

If you’ve never heard of Hanson or his shows, it’s time to catch you up on “Epic Trails,” Backpacking TV, and the man himself.

Thus far, Epic Trails has followed Hanson on treks into Peru’s Sacred Valley, through Papua New Guinea, and deep into Fiji’s backcountry. Hanson’s take on international travel differs from the rest through the sheer variety of hiking and outdoor settings. He’s not landing in cities to get a taste of the local cuisine — at least not on camera.

Instead, Hanson’s narratives use the historical role of trails as thoroughfares and connections between communities.

Take, for example, a Season 2 episode that highlights the very damp — and slippery — Kokoda Track. The thin trail winds over steep tropical terrain for 60 miles and for centuries served as the sole connection between different tribes.

During World War II, it marked the site of a battle between Japanese and mostly Australian Allied Forces, many of whom perished in the harsh terrain.

Where to watch: Half-hour episodes of “Epic Trails” air on Outside TV and Fox Sports networks. Past seasons are also available through streaming services, like Amazon Prime. Perhaps the easiest way to find episodes and watch is to use your smart TV’s search feature. 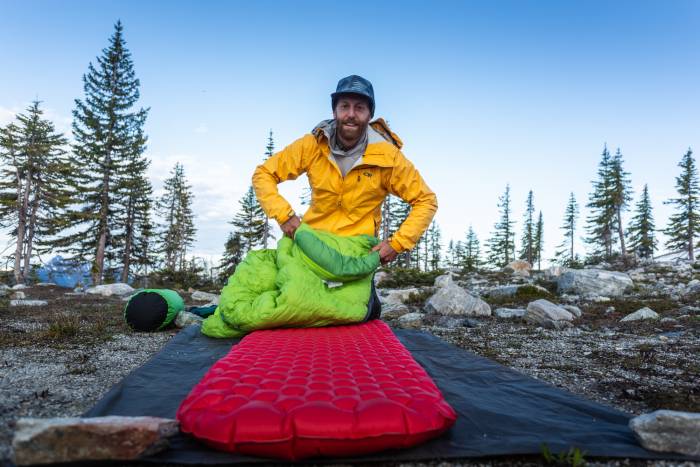 Watching the channel in the offseason or when you can’t get away for your own adventure is a great way to brush up on basics and get situational tips for experienced hikers and campers.

In the video, “Tips for Backpacking in the Rain,” Hanson sets up his tent in a reasonable clearing and still runs into issues brought upon by constant rain. The video then becomes a pragmatic, real-world example of how to salvage a rainy camping trip.

In another episode, Hanson recalls a brush with death while canyoneering. But there’s light-hearted fare too. “How to Poop in the Woods” has accumulated more than 232,000 views (and a follow-up) since it was uploaded in 2015.

Then there are the gear reviews (which we at GearJunkie know a thing or two about as well). In these, Hanson walks viewers through topics like the best and worst clothes for camping, the best shoes for specific types of hiking, and even field comparisons of making coffee. 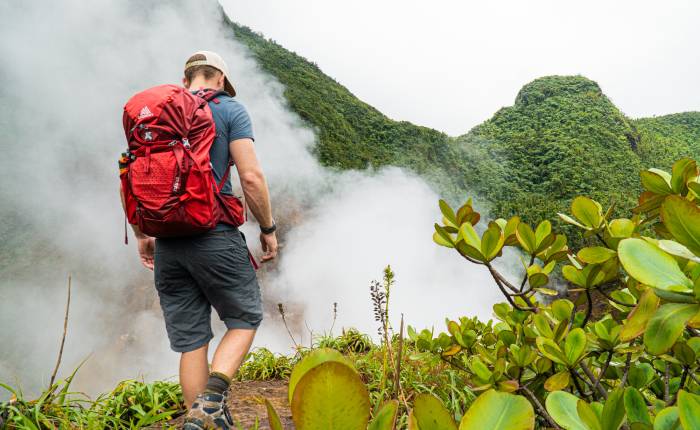 GearJunkie: Give us some background, Eric. Where did you start? When did it click that this could become your full-time gig?

Eric Hanson: It all feels so random and unlikely. I had always been an outdoorsy person, mostly in the general way. But I have a distinct memory of doing a solo backpacking trip in White Sands National Monument in the middle of a really rough part of my life. Basically, everything had fallen apart.

As I was stargazing in this incredible place, lying on the sand, I decided that I would use this opportunity as a clean slate in life and pursue my dream of combining photography and video work into the outdoor world.

I ended up taking a job as a wilderness therapy guide in Utah and started a side hustle as a freelancer. Ultimately, that led to making a video that caught the attention of the producer at Heliconia. Out of the blue, he reached out and asked if I’d be interested in hosting a hiking and backpacking TV show. Needless to say, I was.

This year has been different than most anticipated, so what new projects are you working on?

Well, this year, everyone’s plans got thrown out the window. And our filming schedule was obviously disrupted significantly, putting our whole filming operation on hold for a while. So in the meantime, I built a greenhouse with my girlfriend, and that’s honestly been so satisfying.

We decided that we wanted to build out a van to live out of too. So personally, life in lockdown has been great. But I’m itching like crazy to get out and travel and get to make the show again.

Which videos have garnered the most surprising response or feedback?

Our tip videos do pretty well, as it’s amazing how many people go to YouTube to learn. One thing that I really love to see is people from the destinations of our “Trackin’ Dirt” series (the web cuts of “Epic Trails“) be so excited for their home country to be showcased.

For example, so many people from Papua New Guinea have come across that one and expressed so much gratitude and excitement at the show. Everybody loves to get recognized. So I think that part of the show is really fun.

Gear and Travel Now, in the Future

GearJunkie: What gear innovations are you most excited about?

Eric Hanson: I really like what I’ve seen from some water filtration companies. I love GRAYL‘s new system, as that makes international travel so easy and not needing to use single-use plastic.

And I love that MSR has really invested in solving water issues for communities around the world. Basically, I’m excited about seeing the outdoor industry really taking a hard look at itself and hopefully making some real progress on environmental, as well as social, issues.

What is one piece of gear you can’t live without?

I think the piece of gear I’m most attached to is my sleeping mattress. I’ve got the Comfort Plus from Sea to Summit. And I sleep like a baby on that thing. Honestly, getting good sleep in the backcountry is a game-changer that makes everything more fun and enjoyable.

Is there any part of adventure travel that’s overrated?

Haha, I love adventure travel. I really do. That’s why I love my job so much. But I think the glamour of adventure travel is kind of ridiculous. We all love the romantic notions of far off places — myself included.

But the realities of “adventure travel,” as opposed to vacations, is that usually the conditions are rough, days are long and exhausting, showers are rare, and it’s often freezing cold or crazy hot.

Sometimes the glitz and glamour are real, and it’s genuinely exciting. But people don’t see all the discomfort and exhaustion that goes into showing that.

How does a show about adventure travel cultivate a representative audience among the BIPOC community?

This is something I’m really curious about. I think the outdoor and adventure travel industry has a ton of work to do. I believe representation matters. This industry is extremely white, and we need a much more diverse set of voices out there getting broadcast. And believe me, as a white guy, the irony here is not lost on me.

I want myself and the company I work for to participate in that. Which is why I really want our show to have a global representation of destinations. I want to see advertising and media show people that the outdoor and adventure travel world isn’t just for white people, so BIPOC actually feel welcome in this space.

I think, on a bigger scale, we need to be honest that there are massive inequalities in our society. Systemic racism is a feature, not a bug, of life in America. Travel and outdoor adventures are luxuries. You have to have spare time and money to participate.

And economically, that means this industry is going to lean against BIPOC. So I’d love to see the industry learn how to use its collective influence to shift things politically towards a more just society.

I hope companies choose to hire BIPOC and put actual money, jobs, and opportunities in their hands. Then I think we’ll really start to see the industry make some real progress.

About Heliconia: Heliconia is a video production company that has won awards for its outdoor projects. It produces seven television series, which air on networks like Fox Sports, Outside TV, Sportsman Channel, Nautical Channel, and World Fishing Network.

This article is sponsored by Heliconia. You can find more of Heliconia’s work on its YouTube channel or directly on its website here.