If you want a powerful, versatile lighting solution, flashlights still offer advantages over headlamps in some scenarios. For one, they point wherever you want, not just where your head is pointing.

Also, due to fewer weight constraints, they also tend to have more powerful, longer-lasting batteries and incredible power for modest-size devices.

And to be honest, I’m a flashlight buff. Yes, I also use headlamps a lot in the outdoors. But more often than not, I grab a small flashlight from my truck center console and, if I need two hands for a project, clasp it in my teeth. I just love having the ability to point it wherever I want without having to crane my neck in a specific direction.

So if you love torches, read on for what we’ve determined to be the best flashlights you can buy. Because we’re focused on the outdoors, we rated these based on weight, size, battery life, color rendering, and lighting versatility.

Note: This isn’t a list of “light cannons,” as you’ll rarely need 1 million candlepower. But we did include one monster in case superpowered lighting is your jam!

Our team has been testing the Fenix PD35 for more than a year now, and it has proven itself over and over as a top-notch flashlight. First, the runtime is phenomenal. With the new-for-version-2 Eco mode, you can achieve an incredible 430 hours of runtime.

For our tester, that was enough to run the flashlight regularly for more than 6 months between recharging. That included dozens of camping trips and regular use at higher output modes.

Speaking of modes, the PD35 ranges from a low-end 3 lumens up to searingly bright 1,000 lumens. At that 1,000-lumen turbo mode, you can easily see objects at 250 yards. That’s more than enough for most use cases for recreation in the outdoors.

It’s water-resistant to 2 m, dustproof, and shock-resistant. One feature that we love is that you can easily manipulate between tactical (and strobe-enabling) functions and standard use with a small button near the front.

Beyond the specs, this is a perfect hand-size flashlight with very user-friendly functions. Turn it on and off at the tail switch, tap the small button near the front to adjust power, and check the LED on the button when turning the light on for a battery-level indication.

The PD35 recharges with a micro-USB cord, so it works with the cord you already have in your house, car, or truck.

While the ThruNite Archer lacks a few of the higher-end features of the Fenix, it hits an absolutely excellent price of just $30. For that, you get a quality CREE XP-L V6 LED light source with a maximum power of 500 lumens.

And while that number may not look impressive, it’s way more than enough for most uses. And, using two AAs, it has a runtime of up to 4 days on firefly mode and 11 hours on medium (75 lumens).

Yes, this flashlight does use AA batteries. That certainly brings down the price compared with high-end rechargeables and costs money to operate. But it makes them extremely easy to re-power on backcountry trips — just bring a couple of extras.

At $30, the ThruNite Archer has earned a remarkable 4.5 stars with more than 1,800 ratings on Amazon. 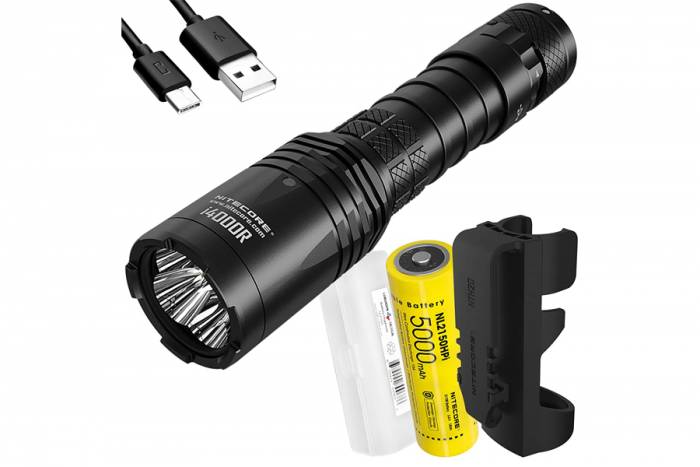 A strong contender for best overall flashlight, the NITECORE i4000R is one of the absolutely best flashlights on the market in terms of overall performance. But it’s significantly larger than our 2020 winner from Fenix, so it’s less suitable for hikers, hunters, or others who value light weight and small size.

If you don’t care as much about size (it weighs 4.76 ounces and is just 6.26 inches long), it should be high on your list for performance alone. The i4000R punches through the darkness with 4,400 lumens on turbo mode. That’s enough to light up objects 250 yards away.

But more importantly, it has five modes, ranging all the way down to the 2-lumen ultralow mode that provides light for up to 380 hours.

It runs on a rechargeable battery that powers four CREE XP-L2 V6 LEDs. This setup provides exceptional versatility for everyone from campers and hunters to search-and-rescue and tactical uses.

The user interface is great, providing easy access to toggle between modes (like its turbo output and strobe mode) through a dedicated button separate from the momentary-on rear tail switch. 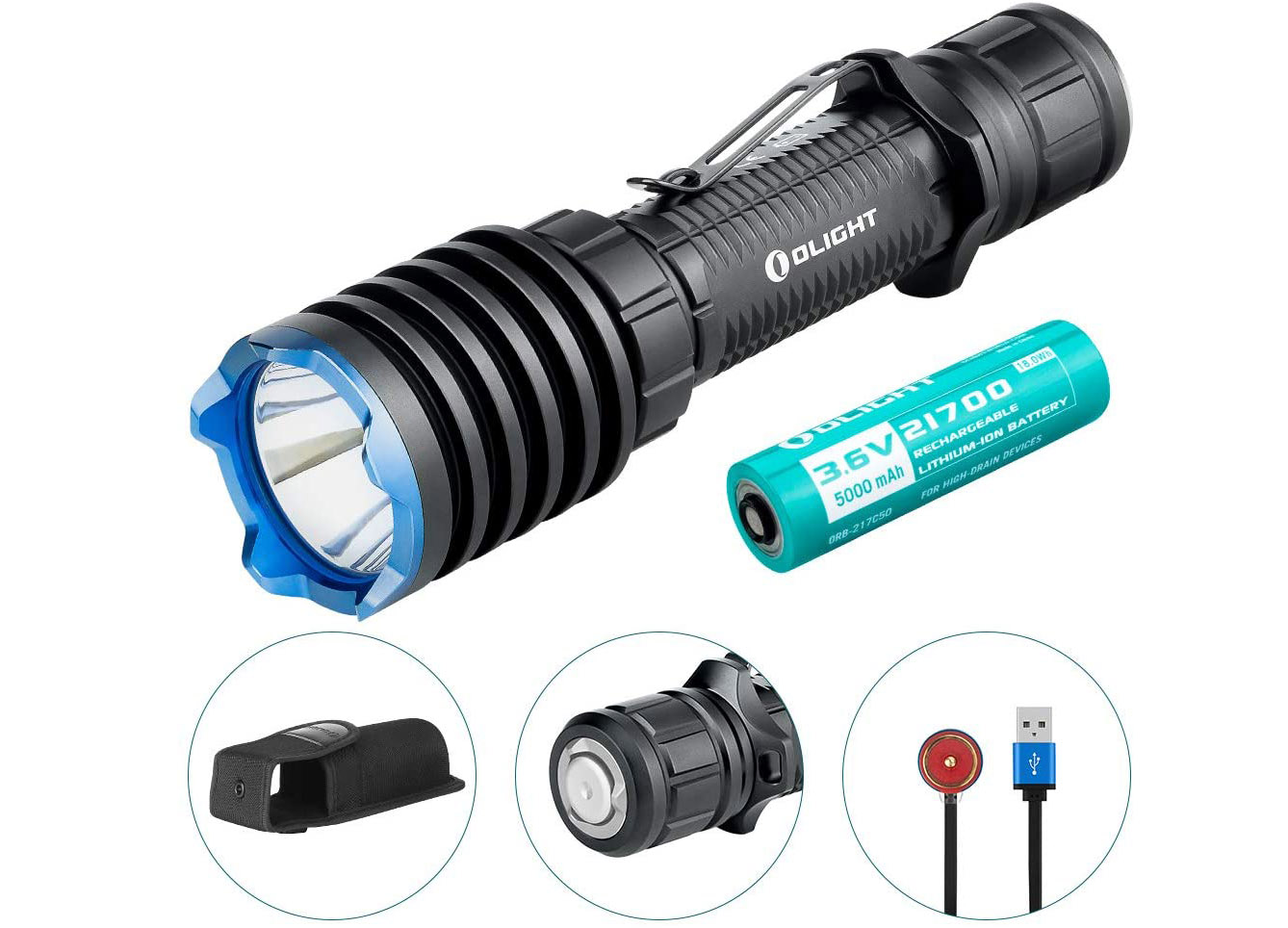 With a maximum output of 2,250 lumens (and ability to project it a whopping 600 m) the Warrior X Pro packs a heck of a punch. And for most people, that level of output is overkill. But for those who need to sweep large expanses of nighttime (like search-and-rescue personnel), this kind of power can come in handy.

Those are pretty wild specs for a flashlight that weighs just 8.43 ounces and measures less than 6 inches in length. It runs on a 5,000mAh rechargeable battery. You can recharge it anywhere you have a 12-volt USB outlet or recharger.

While the OLIGHT Warrior X Pro does give you excellent high-power performance, it’s weaker in the runtime category. That’s because its lowest power output is 300 lumens — more power than you usually need around a campsite. So for people looking for better runtime with lower outputs, there are better choices.

If your work puts your flashlight through a lot of abuse, the Polysteel 600R should be high on your list. We literally tested one by shooting it with a shotgun at about 10 yards. We may have been a little too close, but it’s the only thing that ultimately destroyed this flashlight after months of abuse.

The Polysteel 600R cranks out up to 530 lumens to a distance of 685 feet on high. We found that the adjustable zoom works great to move from a tightly focused beam to a broad floodlight for versatility. On low, it has a runtime of 35 hours while still giving you a useful 42 lumens.

The only downside of this affordable flashlight is its weight. At 12 ounces, it’s probably too heavy for serious backpacking or other endeavors where weight is a factor. 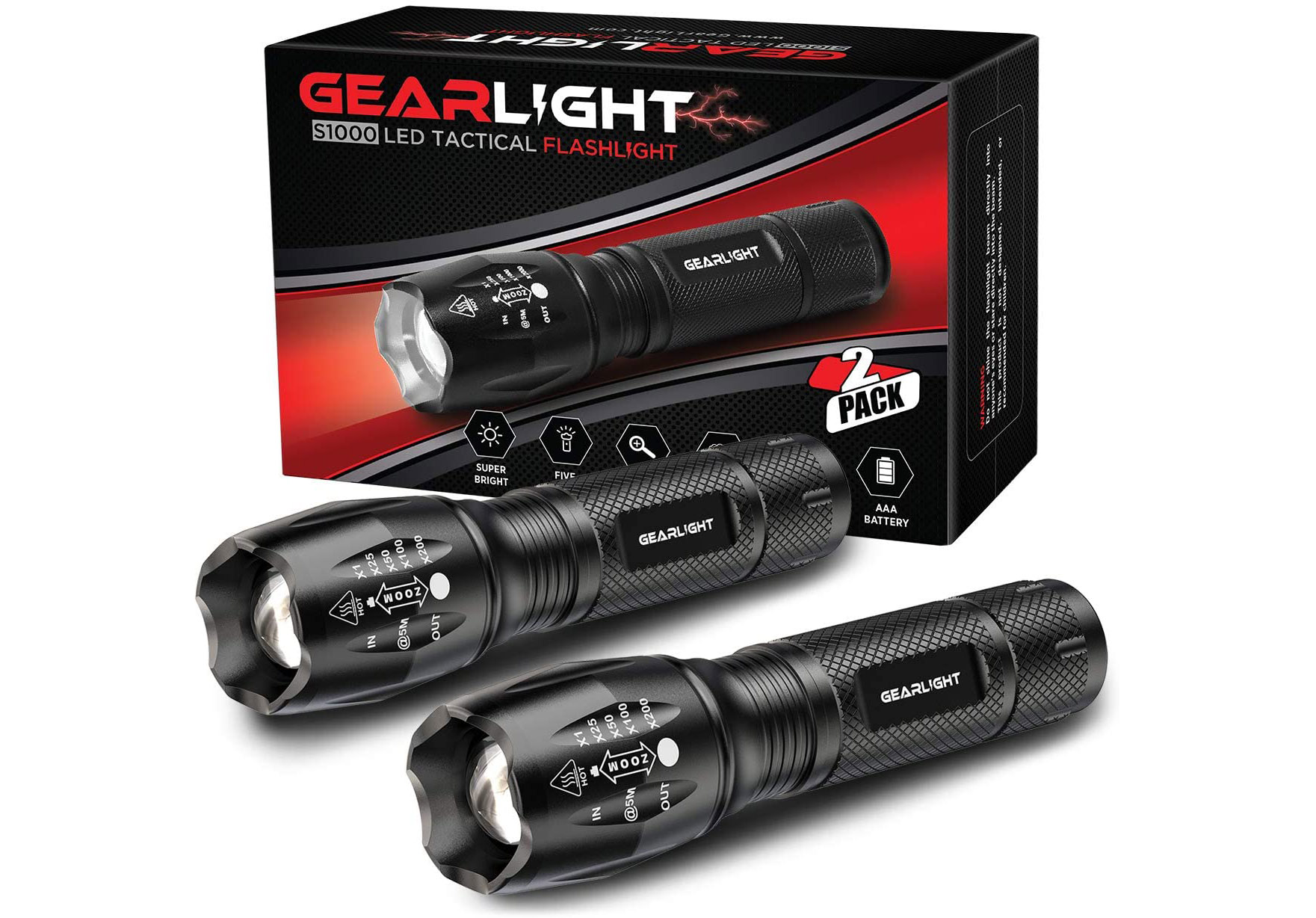 The best crowdsourced flashlight you can get (at about $8 apiece), the GearLight LED Tactical Flashlight S1000 runs on three AAA batteries. And while the light is extremely vague on its specs (it has “high lumens”), it claims to have a throw out to 1,000 feet and has high, medium, and low settings.

While this light sits squarely in the realm of budget gear, consumers rave about its performance. For example, Jude1000 writes on Amazon:

“I needed a flashlight on the farm. Sometimes, I need to go out in the fields at night to check cows and I like to see what I’m getting into. I spotted a possum over 1,000 ft. I would recommend these. I bought a set for all my children and parents.”

For $16, that’s a heck of testimonial. Toss a couple in your truck or cabinets with some batteries close at hand and always have a backup flashlight that performs.

How to Choose a Flashlight

There are a few important specs to consider when choosing a flashlight — size and weight, max power output (usually noted in lumens), minimum power output, runtime (especially in lower modes), and durability/waterproofness.

For most campers, anything over 1,000 lumens is overkill. You’ll often find yourself using much lower settings, especially around camp. However, those big numbers can be nice, especially if you need to see faraway objects.

Another important consideration is if the flashlight uses its own rechargeable battery or if it runs on disposable batteries. Most people will get more value out of a flashlight that offers long runtimes and is easy to recharge. However, it’s convenient to quickly change batteries and refresh your flashlight in the field. Both are valid options, but consider how you’ll use the light (and if you mind constantly buying new batteries).

Modern LED flashlights vary in the quality of their color rendering, meaning that you can see color better with some higher-end lights. Better-quality lights also tend to more efficient LEDs. Some even have “regulators” that electronically manage the power output, resulting in very consistent lighting.

Have a favorite flashlight we missed? Let us know in the comments for future updates to this article.