It was the 30th day of my amazing African adventure and I couldn’t believe I have been traveling this continent for a month now! After visiting so many great places, the next one we visited was Damaraland and Spitzkoppe.

On this day we left the spectacular Etosha behind us and drove on through the desert to Damaraland and Spitzkoppe. When we left Etosha, we were lucky enough to be greeted by a few more animals who waved us off on our journey. We saw a male lion with two more in the distance (binoculars were required at this point!), Some ostriches, zebras and giraffes. 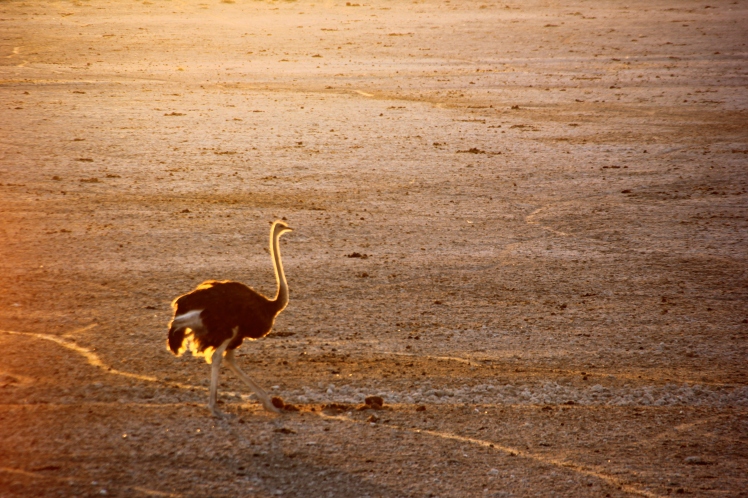 We even saw a springbok spronking (a weird four-legged jump). 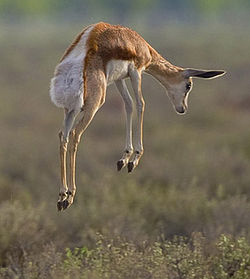 Found photo on google for failing to capture this funny moment but this is a springbok spronking!

Start of the trip to Damaraland and Spitzkoppe

Our trip was bumpy and since 70% of the Namibian roads were dusty and uneven we would not return to paved roads until South Africa. We stopped to see some huge termite mounds and while they weren’t of much interest to our Australian travel buddies because they can also be seen in Australia, I found them fascinating.

There are five types of termites:

All termite mounds in Africa slope westward because of the sun and wind, there are 3,100 species of termites, and millions live in each mound. Aardvark and other animals attack termites for food, and the locals also eat the alite and soldier termites as they are full of protein and, according to our CEO and guide Wellington, are delicious fried. In addition to the source of food, the locals use the soil of the hills to build houses. 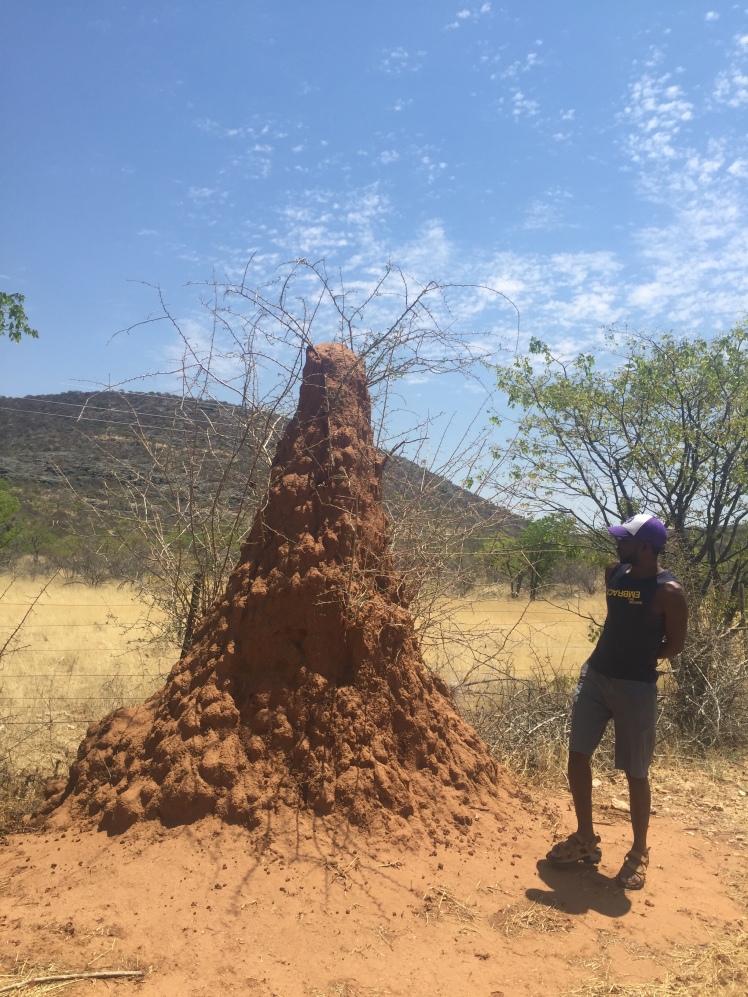 It is amazing to think that such tiny creatures can create this massive mound!

We also saw the national plant of Namibia, Welwitschia mirabilis. It is endemic to the Namib Desert, can live up to 2,000 years and grows sideways. 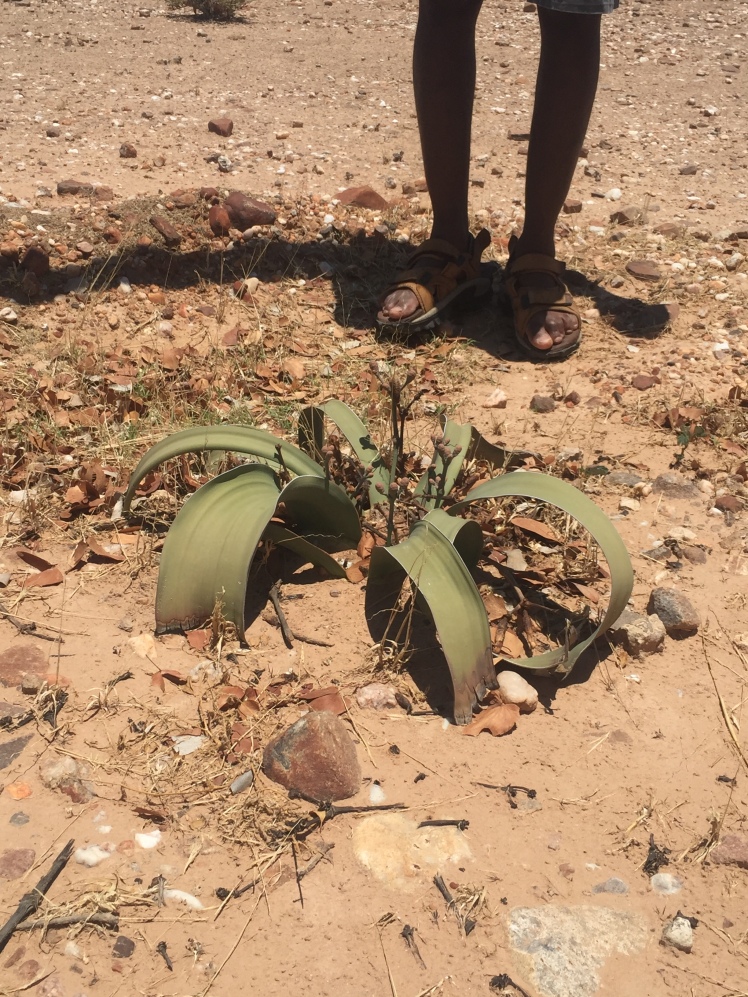 The Welwitschia mirabilis – the national plant in Namibia

The last stop before Damaraland

Our last stop before Damaraland was a national monument: Namibia’s Petrified Forest.

Here we were taught about a phenomenon that began about 280 million years ago when the end of the Ice Age caused a tremendous flood. Trees were uprooted and ended up in Namibia, where they were buried underground and changed shape due to the ingress of minerals caused by pressure. They were petrified, which meant they were now stone trees. As a result of the erosion, the trees reached the surface and were discovered by two farmers in the 1940s. 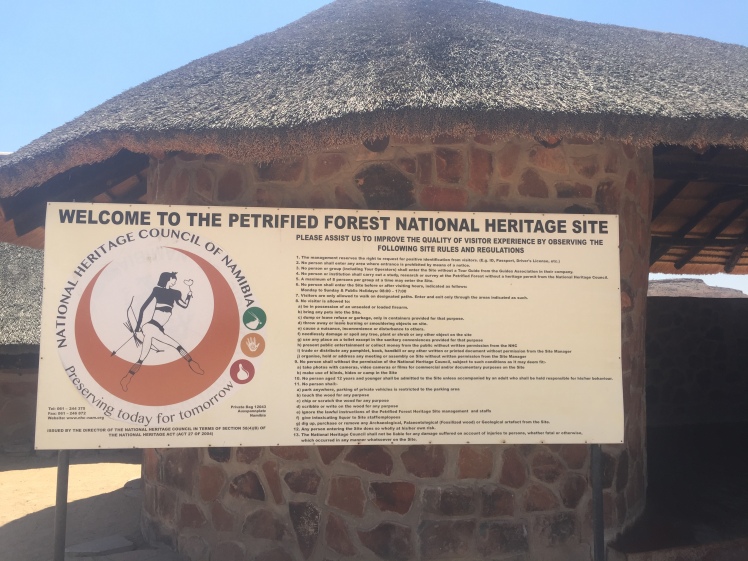 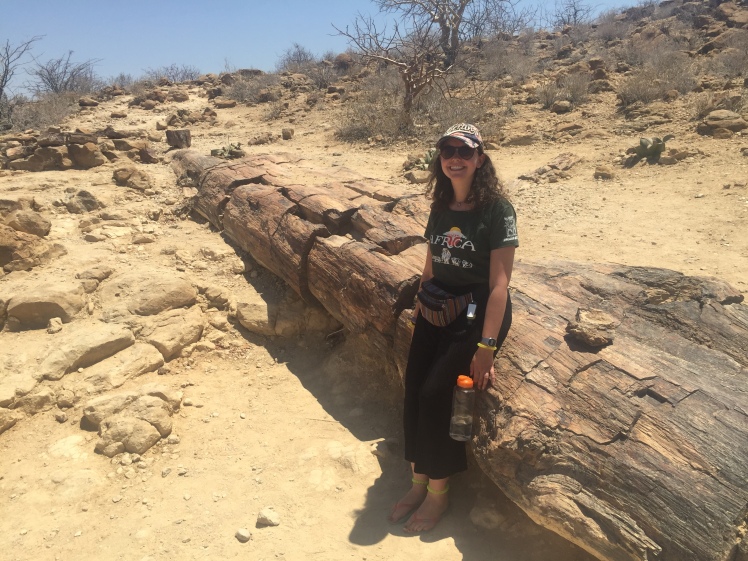 Get to know the Damara culture in Damaraland

When we got to Damaraland we took one Visit the Living Museum to learn about the lost culture of the Damara. Although they no longer live the traditional way, the tour aims to keep the culture alive for future generations. We watched them sing and dance and the men demonstrated their ability to start fires. We were told that this was a skill they originally needed to impress a woman into becoming her wife. We also entered the women’s workshopwhere they made jewelry and knickknacks from materials like ostrich eggshells, seeds, and porcupine tips.

We learned about the traditional medicines and ingenuity of the Damara peoples in creating tools. For example, they would use springbok horns to make weapons for hunting that could also be used for pipe smoking.

Their clothes were made of goatskin and we watched a game that they played for hours and that they took very seriously (which I had seen in Zanzibar) called Bao. This would be used to teach their children how to count in the Khoekhoe language. 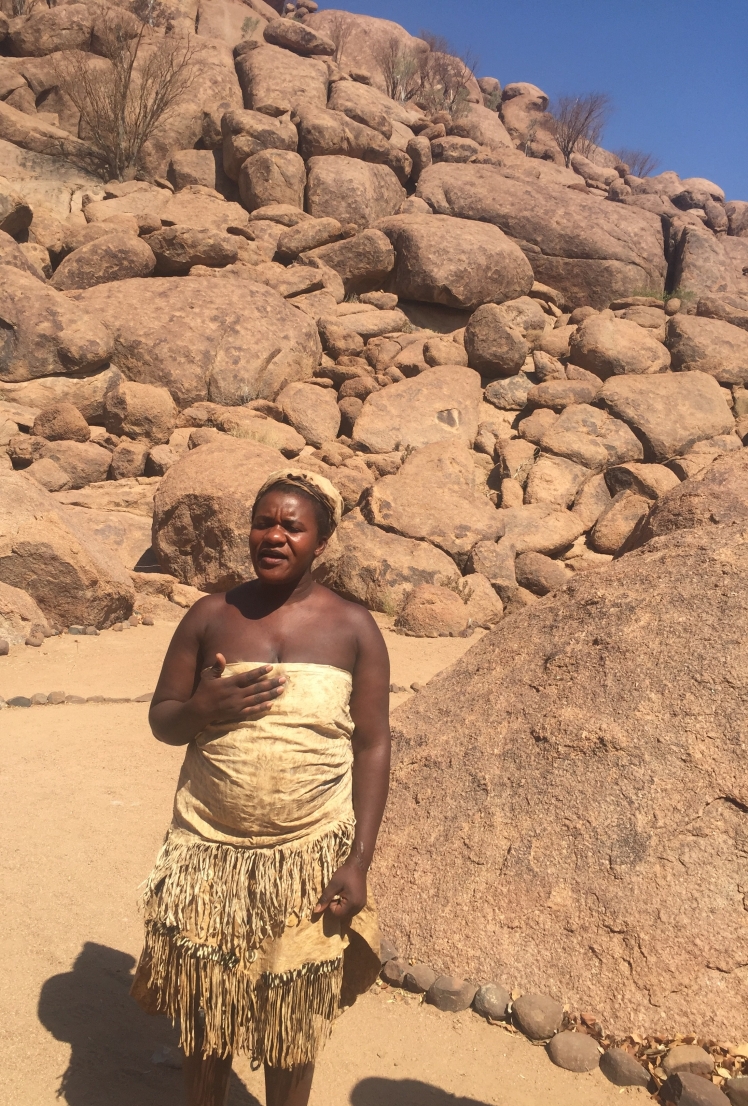 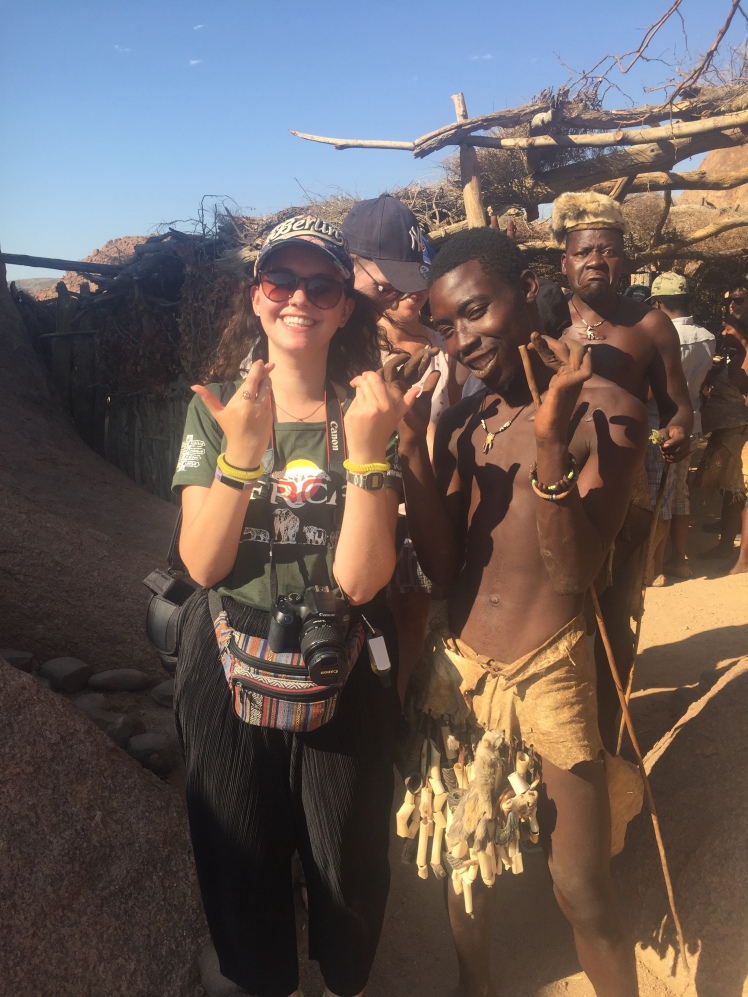 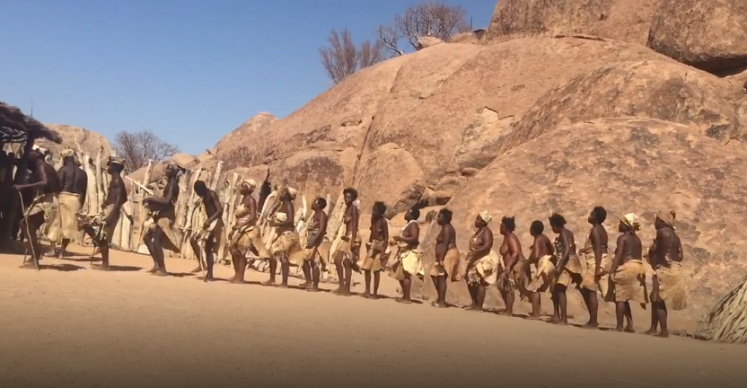 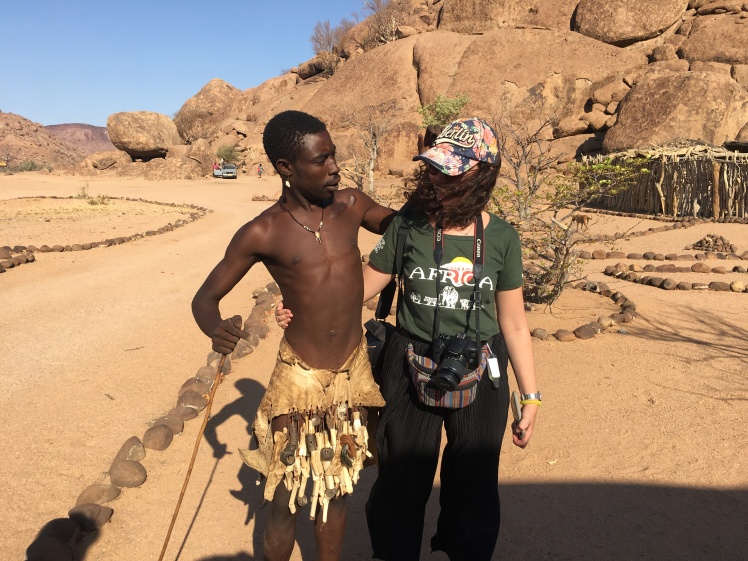 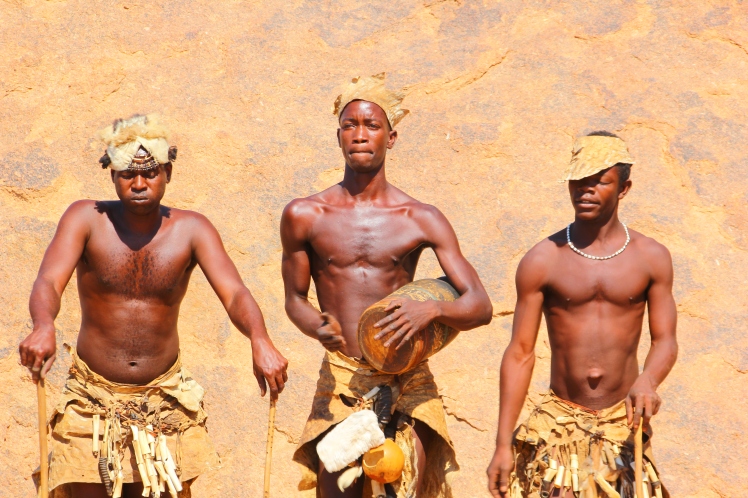 A tour of Twyfelfontein

The following day started with one Tour of Namyia’s first UNESCO World Heritage Site, Twyfelfontein. Afrikaans for “dubious well”, here is a spring that rarely receives rainfall (hence the name) but is best known for its multitude of prehistoric rock engravings.

These were made in the early Stone Age and show hunting maps, footprints, water holes, and animals including giraffes, elephants, ostriches, and rhinos. Some of the artists must have been nomads because there were even animals like penguins and seals that would have been found elsewhere.

The Engravings were made from quartz stones and discovered in 1921but it was never exactly clear when they were made, and historians predicted anywhere from two to six thousand years ago. It is believed that it was the work of Bushmen or Nama artists. There are more than 2,500 rock carvings and paintings in the area. 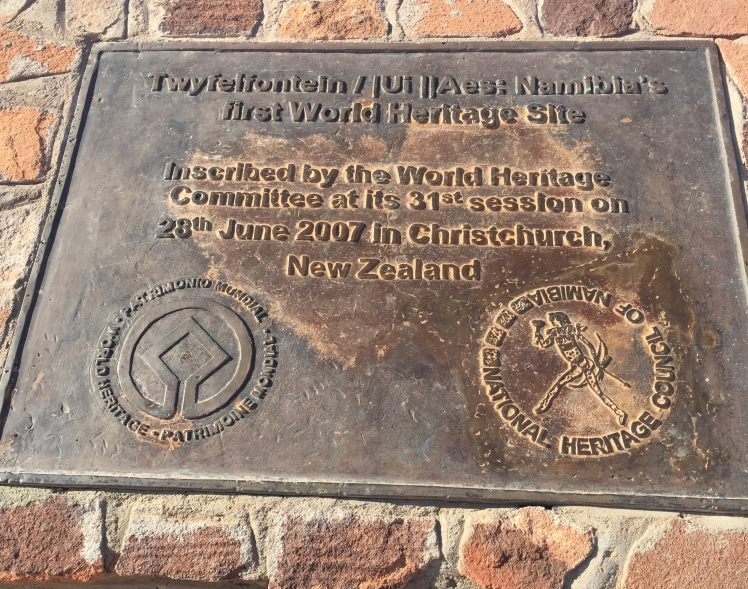 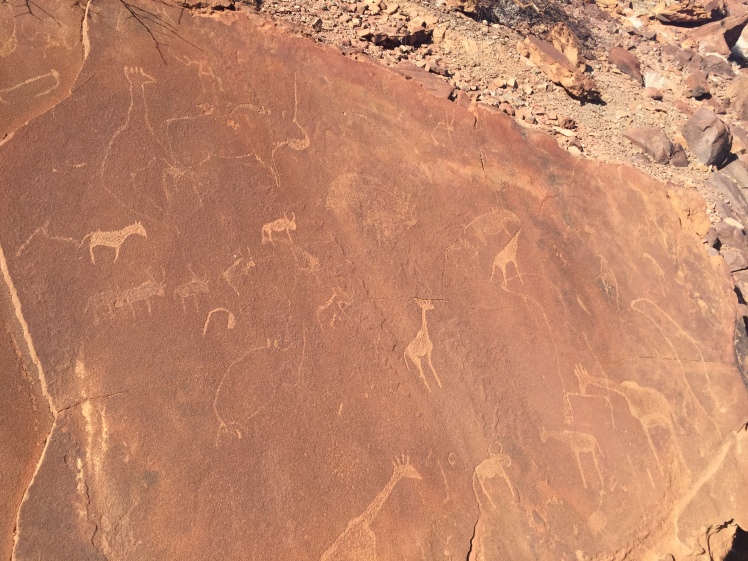 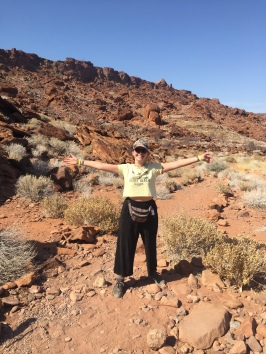 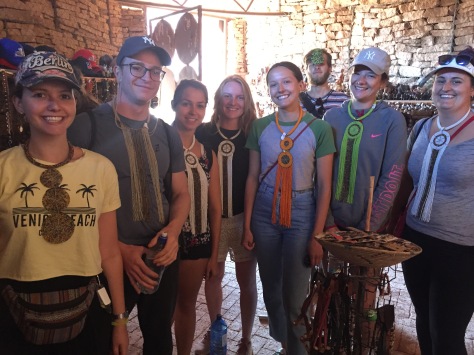 From Damaraland to Spitzkoppe

It was now time to Leave Damaraland and drive south towards Spitzkoppe. We made a couple of pit stops on the way and the first one was in a village populated by Herero people.

We were encouraged to explore their markets as tourists buying their handcrafted goods were their main source of income. I bought a nice bag and we gave the children water. Our CEOs told us it was important not to give them food or candy because we don’t want to promote a begging culture, we cannot give them the same tomorrow, and they may not be able to block their teeth after eating candy clean.

Wellington also referred to the saying:

That phrase sticks with me, and it seems to be very dear to G Adventures’ hearts because they support so many worthwhile companies that do just that. 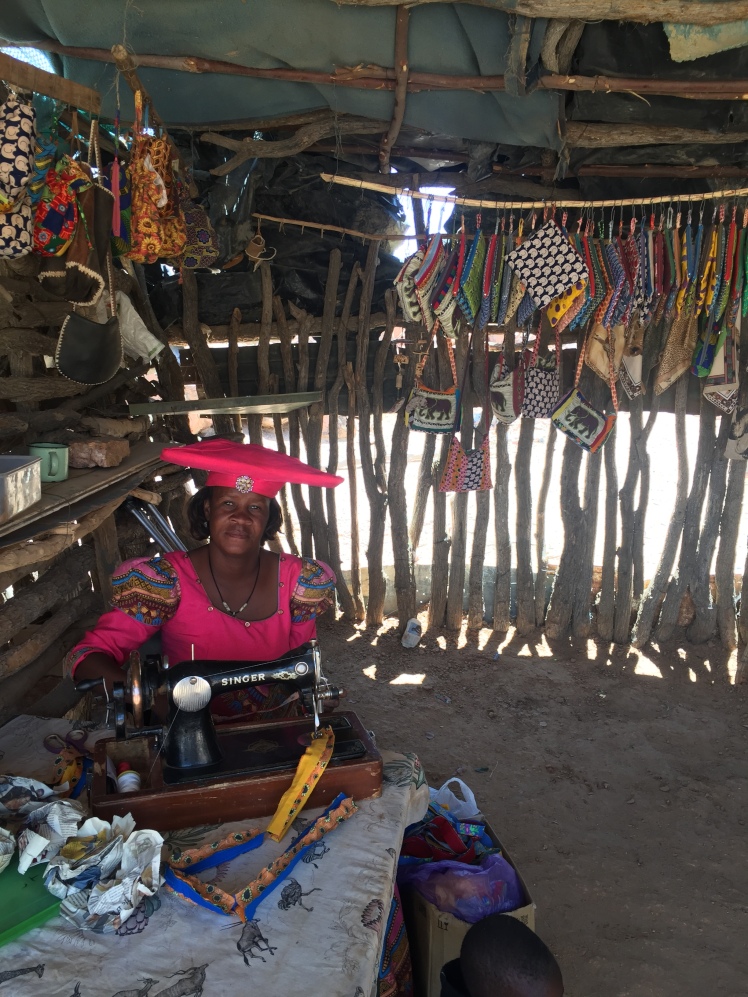 I bought my bag at this lady’s booth. Your dress was exquisite! 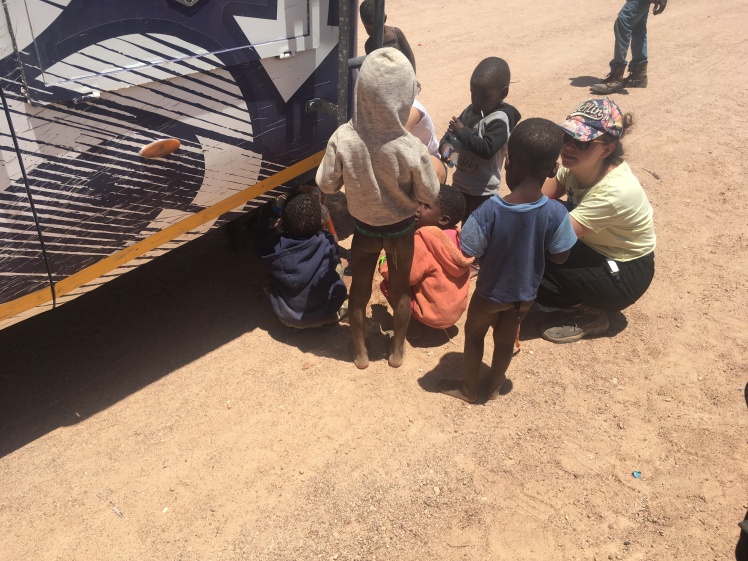 We passed the Brandberg, which at 2,573 meters is the highest mountain in Namibia. We also stopped to meet some Himba peoplewho are indigenous and have an estimated population of around 50,000 people living in northern Namibia.

Wellington gave us some information about this fascinating group, whose ancestors can be traced back to the early 16th century. They conduct arranged marriages from the age of 10 and their perception of wealth is reflected in the number of cows they own.

They wear special devices around their ankles to protect them from snake bites and make their own natural hair extensions, sunscreen, and mosquito repellants. Women are not allowed to use water for washing, as there have traditionally been many major periods of drought and only men were allowed to use this scarce product.

Hence, the women used (and still use) smoldering charcoal which they would mix with herbs and wash in the smoke produced. Men also practice polygamy, but women are forbidden to do so. 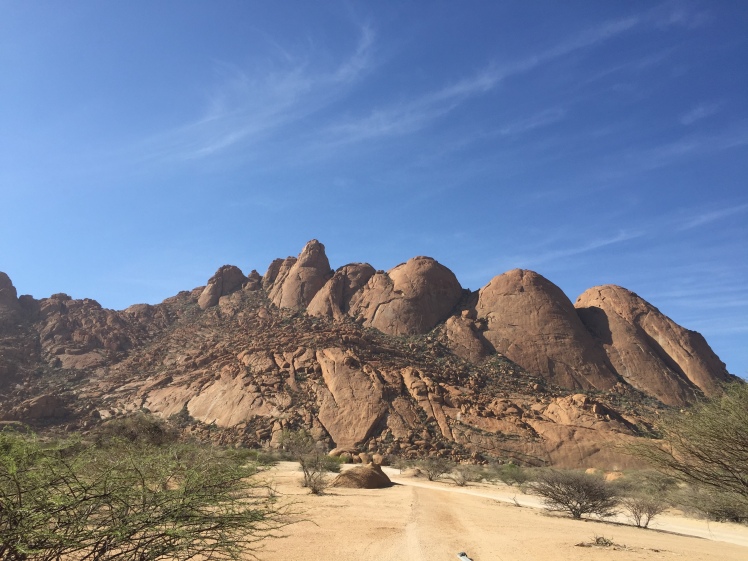 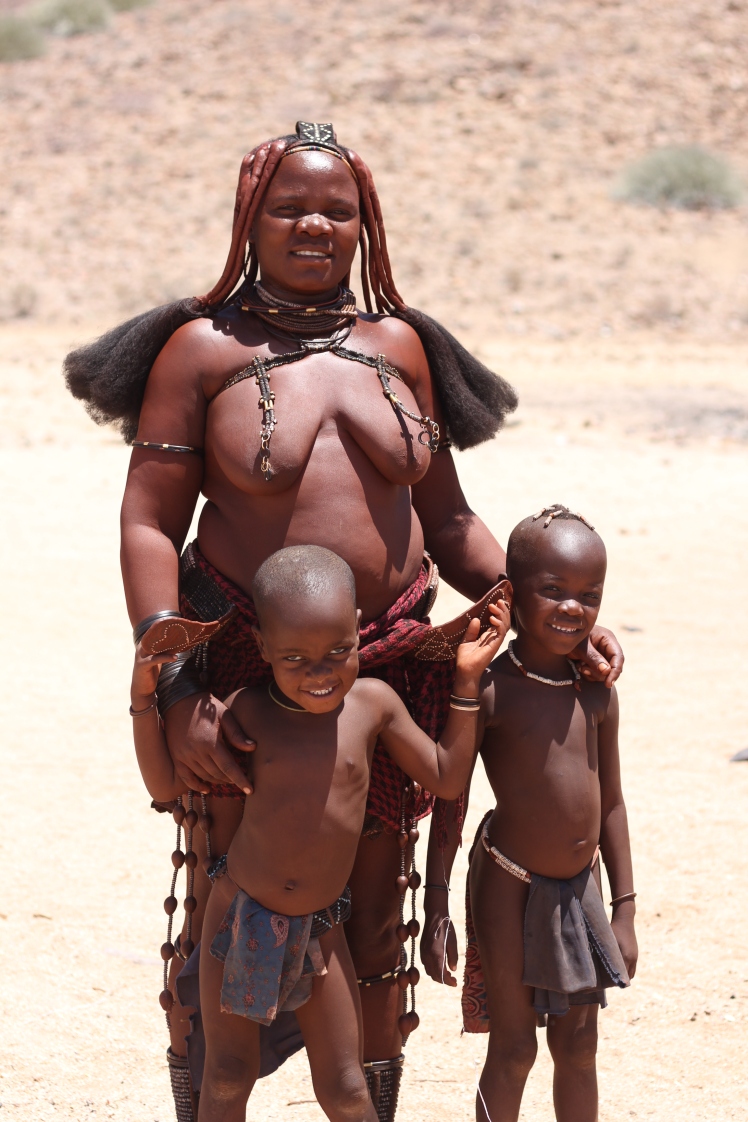 A Himba lady and her two sons

When we arrived in Spitzkoppe, we noticed the many granite peaks in every direction as they contrast dramatically with the flat, surrounding plains. It was nice walking around here almost 700 million years old areaand we spent the rest of the day climbing and exploring the breathtaking landscapes in the Namib Desert. 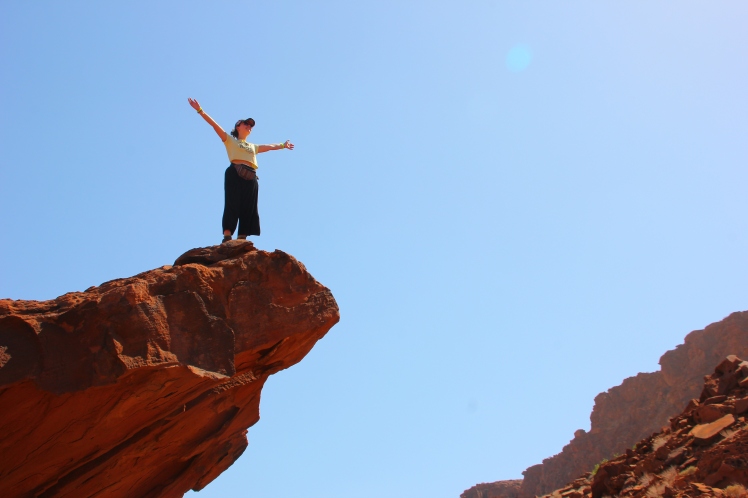 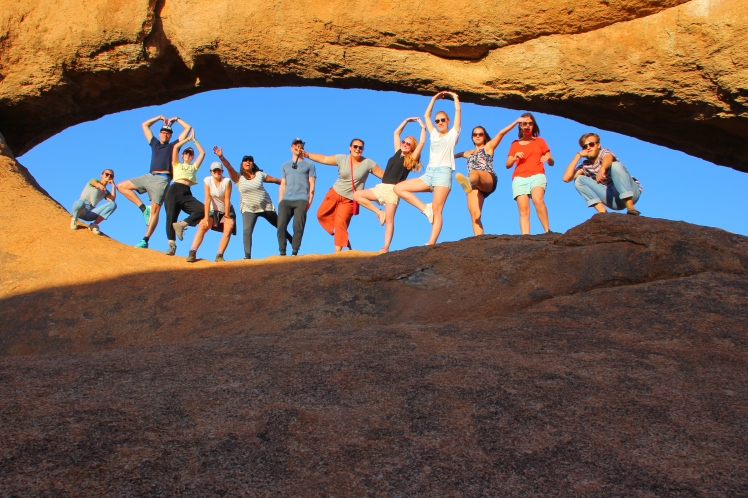 Just before the sun went down we climbed one of the peaks and watched from above, listening to the bird song and looking at the natural beauty around us. 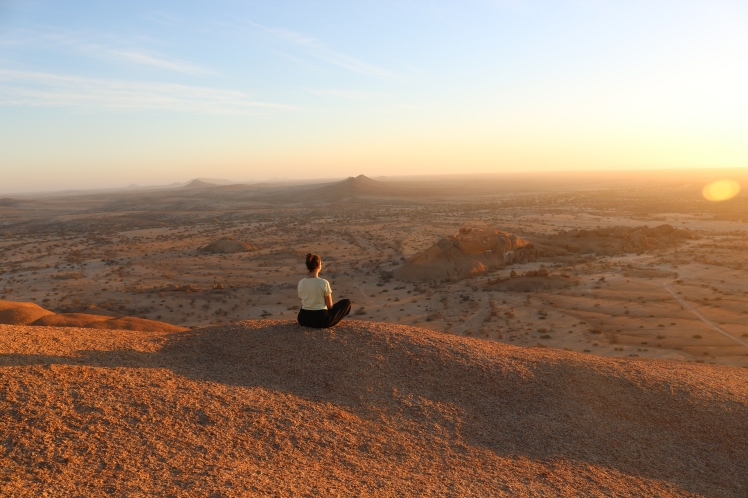 Sunset in Spitzkoppe in Namibia 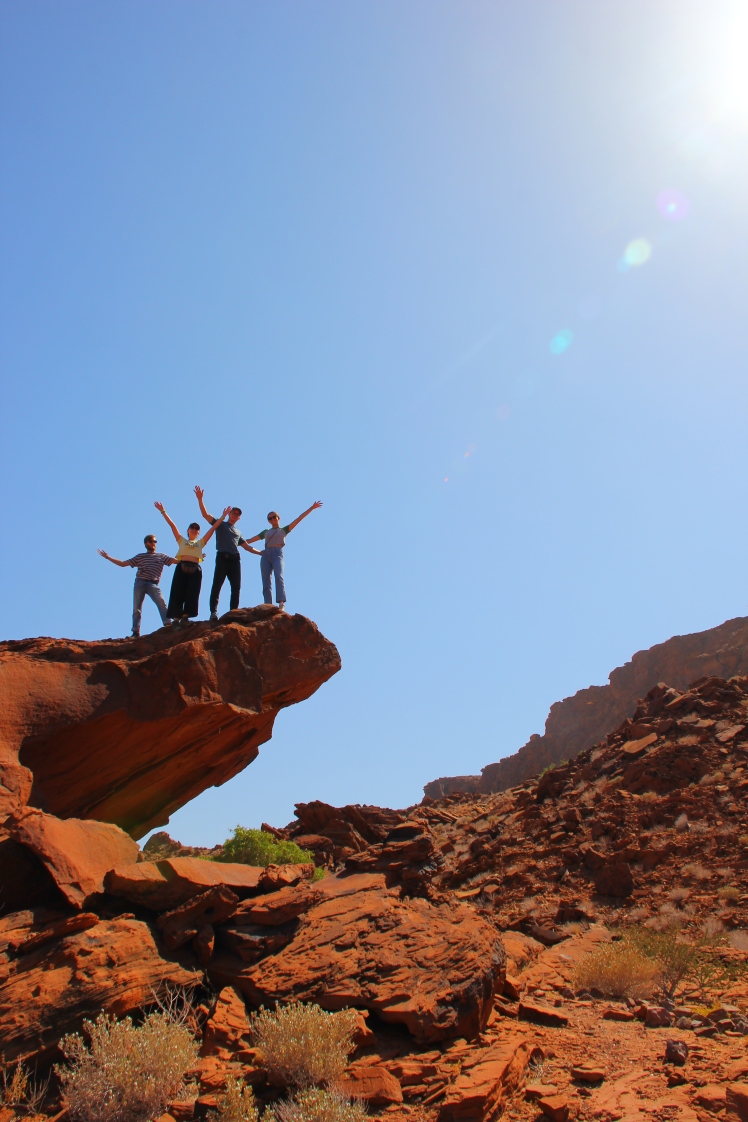 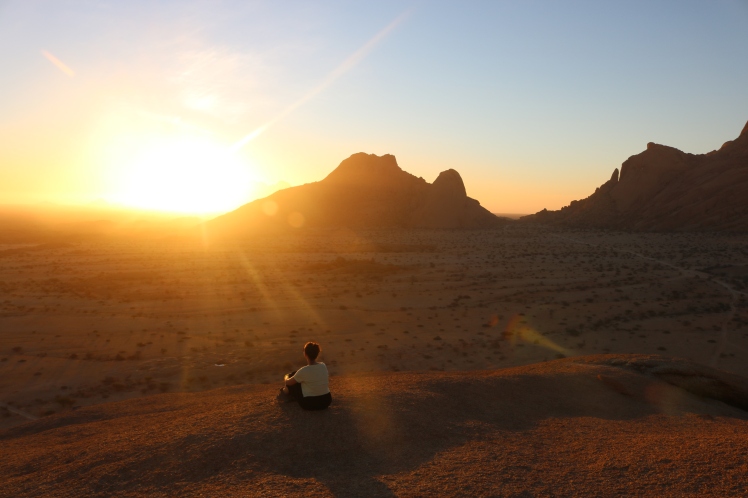 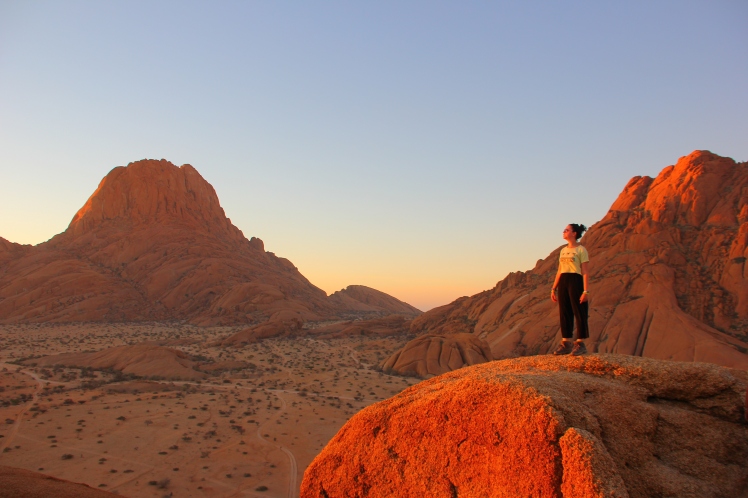 Click here to see my virtual 360 ° tour of the sunset on one of the peaks of Spitzkoppe!

In the evening we enjoyed each other’s company around the campfire, singing and staring at the incredible night sky. 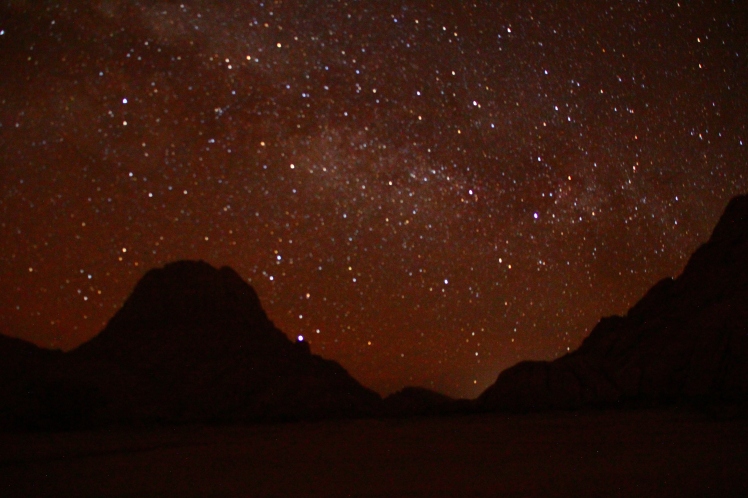 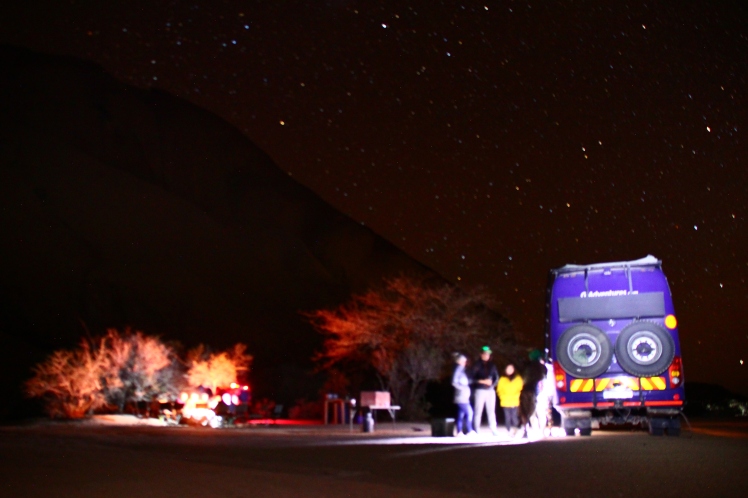 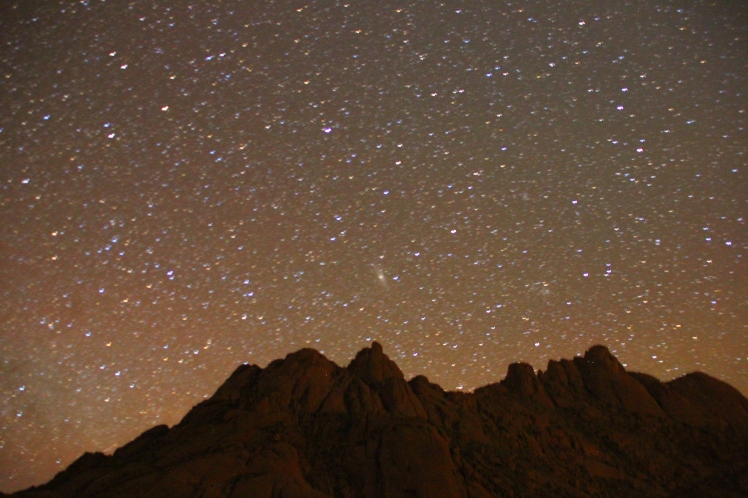 Next we ventured to Swakopmund, where we would not explore the Namib Desert on foot, but by board.

Are you thinking about exploring Namibia? Check out the Namibia tours offered by G Adventures – many include visiting Damaraland and Spitzkoppe.

Best Ways To Enjoy A Trip To Las Vegas Without Gambling

Why Hotel News Is Essential to Both Hospitality Professionals and Tourists